Posted on May 14, 2021 by Schooner Ernestina-Morrissey Association

The Ernestina~Morrissey Crew has several diverse watches. There are folks, whether by family or geography, that know her best as Effie M.Morrissey.  The Cape Ann Watch, some from ship builder and fishing families, feel the strongest ties to her Grand Banks days over 100 years ago! From Nova Scotia and across the United States supporters reach out to SEMA. 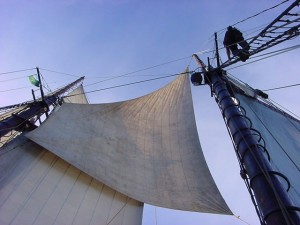 Here is the Fisherman flying during the 2001 Gloucester Schooner Race which Ernestina won and earned the Esperanto Cup prize!

If you would like to make a donation for the Fisherman’s Staysail we will gladly post your dedication below.  Just click the yellow DONATE button on the right. 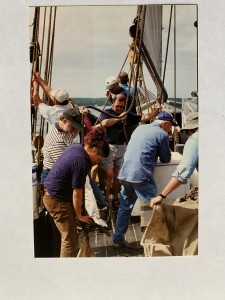 Here's the crew getting ready to raise the Fisherman after rigging it up.

Thank you! to Folly Cove Fine Art for their $1,000 donation to support the purchase of Ernestina~Morrissey‘s Fisherman’s Staysail. 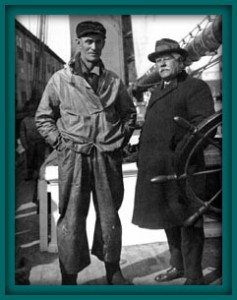 Clayton Morrissey of Gloucester dedicated his donation to his Grandfather Captain Clayton E. Morrissey,  who, in 1895 at age 19, became the second captain of the Effie M. Morrissey when his father became ill. He was a famous fishing and racing captain. Read more HERE. 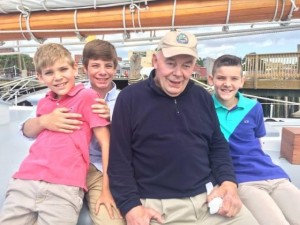 Clayt Morrissey with his grandsons Johnny, Will and Ben Andrew

Paul Sydlowski sent a dedication with his donation: to his great-great-grandfather Captain Harry Ross.

Captain Ross was the captain of Effie M. Morrissey in 1912 when she made her “Record Run”. Read about it HERE. Onboard was Frederick William Wallace a writer and photographer. Remember, this was 1912! He wrote:

To the Skipper I said: “I want to take some pictures from the end of the bowsprit while she’s going along like this. Will you come out with me and hold me while I snap the photos?”

“Sure thing,” he replied, and to the wheelsman he said, “Watch her now and don’t let there

One of the photos Wallace took from the end of the bowsprit while Harry Ross stood at the very end, one arm around Wallace and one hand on the jib-stay.

be any funny-business while we’re out there!” The man stared at us with astonishment on his features. Taking a firm grip on the spokes, he nodded, “I’ll watch her, Skipper!”

With oilskins and rubber boots on, we went over the bows and clambered out along the footropes of the Morrissey’s lengthy bowsprit. Below our feet, the stem was shearing and ploughing the blue-green sea into a mass of glittering, thundering foam. From our perch, we could feel the vessel trembling throughout her hard-driven hull. And when she topped a big comber, we hung like bats to the jack-stay and caught our breaths as she swooped down into the sea with the suds boiling up and through the hawse-pipes.

The Skipper grabbed the jib-stay and pulled himself up to stand on the extreme end of the bowsprit. I got up next and he held me around the waist in order that I might have my two hands free to handle the camera. I got one snap, when the helmsman let her come-to a little. The Morrissey listed to port and laid her whole side down. “The crazy scut!” growled Harry as we lurched precariously to leeward. But animated with the recklessness of the seeker after something novel, I made two snaps as she careened. “Did you get it, Fred?” inquired Ross excitedly. “I sure did,” was my reply. “Then let’s get to hell out of this,” he said hurriedly, “afore we get run under!”