Patrick Administration Announces Funding for Rehabilitation of the Schooner Ernestina-Morrissey

Ernestina-Morrissey is currently berthed in New Bedford at the State Pier. The Ernestina-Morrissey was launched in February 1894 at the James & Tarr  Shipyard in Essex, MA under the name Effie M. Morrissey. The vessel was owned by the John F. Wonson, Co. of Gloucester, MA and Captain William Morrissey, who named the boat after his daughter. The Effie M. Morrissey was later purchased in 1926 by Captain Robert A. Bartlett, a Canadian-born Arctic explorer. As an Arctic explorer, Bartlett focused on pursuing several expeditions and in 1940 the “Little Morrissey” (as he frequently referred to the vessel) reached within 600 miles of the North Pole. In 1948, the ship, which had been damaged by fire, was purchased and restored by Captain Henrique Mendes and used as a Cape Verde packet. Renamed Ernestina, the schooner regularly sailed between the Cape Verde Islands and the United States, and was the last sailing ship, in regular service, to carry immigrants across the Atlantic to the United States. The Ernestina was donated as a gift to the United States by the newly independent West African Republic of Cape Verde in 1975 and the ship was restored and returned to her land of construction in 1982, where additional restoration took place. The Ernestina was designated a National Historic Landmark in 1990 and enjoyed its fourth career, as an educational vessel. “The restoration of the Schooner Ernestina-Morrissey is a great

The ship's name has been officially changed to Ernestina-Morrissey and new quarterboards have been installed.

example of the dedication and commitment the Patrick Administration has to preserving the Commonwealth’s historical ship,” said Secretary of Energy and Environmental Affairs Maeve Valley Bartlett. “The vessel will serve as a historical landmark reminding us of the cultural opportunities the ship brings to the Commonwealth.”

The restoration project is made possible through the funding from DCR’s capital budget, 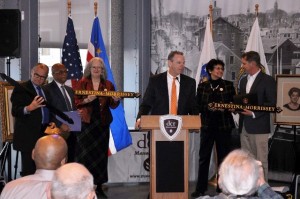 as well as private and nonprofit contributions. Philanthropists H.F. “Gerry” Lenfest of

Philadelphia and Robert Hildreth of Boston advocated for the restoration and rehabilitation of the ship for many years and together are contributing $2.8 million toward the restoration of the vessel. In addition, SEMA (Schooner Ernestina-Morrissey Association) is providing $1 million (HELP US BY DONATING TODAY!) and the Patrick Administration is investing $2.5 million to preserve the vessel for future generations and to ensure that the ship will once again become seaworthy.

“We’re thrilled that Governor Patrick allocated the funds to set these repairs in motion,” said DCR Commissioner Jack Murray. “This work could not happen without the very generous and philanthropic gifts of our benefactors; Mr. Gerry Lenfest, Mr. Robert J. Hildreth and SEMA. We look forward to seeing the Ernestina-Morrissey seaworthy and sailing from New Bedford Harbor once again.” Over the past several years, DCR has been involved in a structural assessment of the Schooner Ernestina-Morrissey in an effort to identify what repairs are essential for the ship. That study yielded several 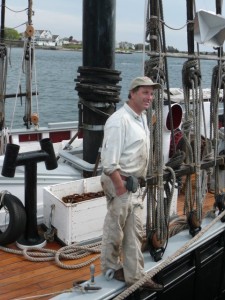 recommendations that the agency will undertake including:

In planning for the Ernestina-Morrissey’s future role and use following completion of the rehabilitation project, DCR has been in discussions with officials at the Massachusetts Maritime Academy (MMA) to develop a plan for its use during parts of the year as a training vessel. As a part of these plans, the Ernestina-Morrissey would also maintain its home berth in New Bedford and be available during the summer months in that community in order to provide continued access to educational programming and tours.

We are very thankful to the Governor, the Commissioner, the Ernestina Commission, 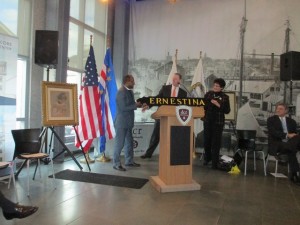 SEMA, the elected officials from New Bedford, and the donors for paving the way for her to sail again,” said Pedro Graciano Gomes de Carvalho, Cape Verde’s Consul General to Boston. “The Schooner Ernestina-Morrissey, as in the past, will always represent the friendship between the people of the United Sates and Cabo Verde, and the voyages of our forefathers, that gave way to the thriving Caboverdean community in America.”

“Let us not be under any illusion that any one individual, group of people, or entity, established the restoration of the Schooner Ernestina-Morrissey,” said SEMA

SEMA President Julius Britto expressed the heartfelt response the ship elicits in everyone who knows her.

President Julius Britto. “It has been her  soul, her spirit and her dignity that has compelled us all to restore her to sailing glory; because when this gracious lady sails she teaches us all about the humility of being.”

Philanthropist Gerry Lenfest was one of the main donors of this project and he notes that, “I am so pleased that the Schooner Ernestina-Morrissey will now have a new chapter to add to her illustrious prior life.”

“It is fantastic that after 15 years of being associated with trying to repair such an historic ship, it is finally happening,” said Philanthropist and donor Robert Hildreth. “It took many hands on deck.”

“The restoration of this historic schooner, the Ernestina-Morrissey, represents something much greater than mere vessel maintenance. This restoration is symbolic of the state’s commitment to honoring New Bedford’s history while also promoting its trajectory into cutting edge industries, like wind energy. We saw over the summer, with a visit from the restored Charles W. Morgan, what a great boon to the area the restoration of our historical ships can be,” said Congressman Bill Keating. “I applaud the Schooner Ernestina-Morrissey Association, the state Department of Conservation and Recreation, and all other stakeholders on this great achievement. I look forward to setting foot on its celebrated deck and seeing the Schooner Ernestina-Morrissey sail once again.”

“The Massachusetts Schooner Ernestina Commission is pleased that we have reached this new milestone in Ernestina-Morrissey’s unique and diverse lives. Throughout her 120 years, she has persisted as a boundary-crossing force of resilience and adaptation, whether in the icy Arctic, in the fishing grounds of Gloucester or Newfoundland, in Cape Verdean 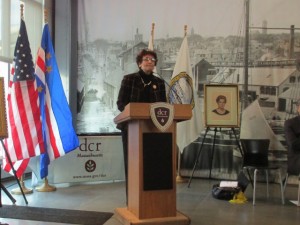 inter-island waters, in transatlantic voyages filled with dreams,” said Chair of the Schooner Ernestina Commission, Dr. Laura Pires-Hester. “She is an amazing educator. Her ‘stories” have been extraordinary, including her 1982 return as extraordinary gift from the newly-independent Republic of Cabo Verde. So many thousands have walked her decks, sailed and/or worked on her, studied on her, created songs to her, and worked to keep her alive and working. We salute and give thanks to all–volunteers, donors, advocates, elected officials, educators, community organizations, friends, all. We look forward to writing her “whole new history”, together.”

“The Ernestina is a piece of living history that is an important educational tool that should not be squandered by neglect but cherished for its rare ability to teach us about our past”, said State Senator Mark Montigny. “The Ernestina is a direct link to our proud maritime and seafaring history that is why during my tenure in the Senate I have routinely secured funds to repair, operate and provide educational programming through amendments to the annual budget and state grants. As Chairman of the Committee on Bonding, Capital Expenditures, and States Assets, I secured $ 2.5M for the restoration of the Ernestina as part of an environmental bond bill which is part of the funds being utilized to complete this project. The preservation of the Ernestina is another significant milestone in creating and fostering a tourist based development of the waterfront and downtown with critical state investments in the arts, culture, history and tourism sectors of the economy.”

“The Schooner Ernestina-Morrissey is an important part of history for both New Bedford and Massachusetts, and after so many years of advocacy, I’m pleased the vessel will be ready to sail again,” said Representative Antonio F.D. Cabral.

“I want to thank Governor Patrick and his administration along with philanthropists Gerry Lenfest and Robert Hildreth for stepping up and ensuring that the complete restoration of the schooner is finally a reality and I look forward to the return of the vessel to herhomeport of New Bedford,” said Mayor Jon Mitchell. 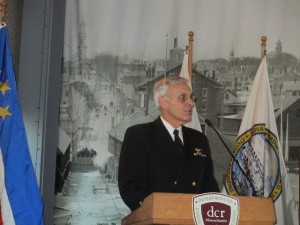 “Massachusetts Maritime Academy is pleased and proud to be able to be part of the next chapter of the life and legacy of the famous Schooner Ernestina-Morrissey,” said MMA President Admiral Richard Gurnon. “She was once a fishing vessel, then an Arctic explorer and finally a packet ship bringing immigrants from Cape Verde to America. Now she will start a new life as a sail training vessel bringing the young people who sail on her to new horizons of understanding, growth and opportunity. Once she is fully restored, she will be placed into service on the waters of the Atlantic, replicating her many voyages of scientific discovery and personal challenge. Rather than a museum piece on display, she will be a sailing ship, alive on the waters of New England. By having our cadets live aboard the schooner – sailing and maintaining her throughout the year – they will keep the traditions and history of the Morrissey, Bartlett and Mendes families alive, and they will be part of the next generation who will sign the logbook of this spectacular example of American shipbuilding skill.” 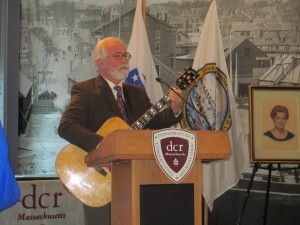 The event closed with Tom Goux performing his song about Ernestina-Morrissey "Sail Her Home" "You've seen her sailin' home, Brava to New Bedford, we all claim her as our own". There were few dry eyes as he finished with "There's a memory in her wake, Buzzards Bay to Nome, Sail Her Home, Sail Her Home"

SchoonerErnestina-Morrissey. After an extensive internal review of both proposals, DCR selected Boothbay Harbor Shipyard in Maine to complete the work. A contract of $6,048,025 has been awarded to complete the necessary improvements to the historic ship.

The Massachusetts Department of Conservation and Recreation (DCR), an agency of the Executive Office of Energy and Environmental Affairs, oversees 450,000 acres of parks and forests, beaches, bike trails, watersheds, dams, and parkways. Led by Commissioner Jack Murray, the agency’s mission is to protect, promote, and enhance our common wealth of natural, cultural, and recreational resources. To learn more about DCR, our facilities, and our programs, please visit www.mass.gov/dcr. Contact us at mass.parks@state.ma.us.