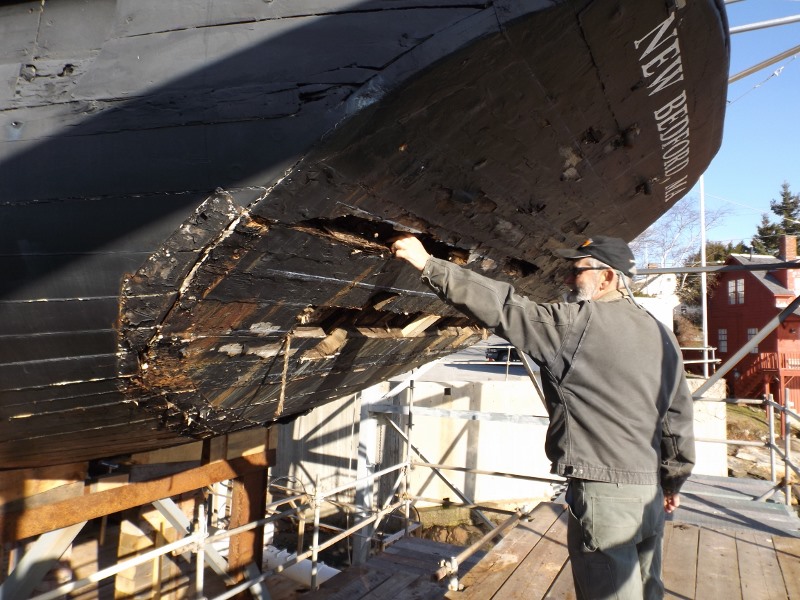 Schooner Ernestina Commissioner Fred Sterner observed that the stern seems the most obvious problem area to be addressed during the current project to restore the ship's hull.

Fred visited Boothbay Harbor Shipyard in mid-November, 2015.  These photographs were taken then. 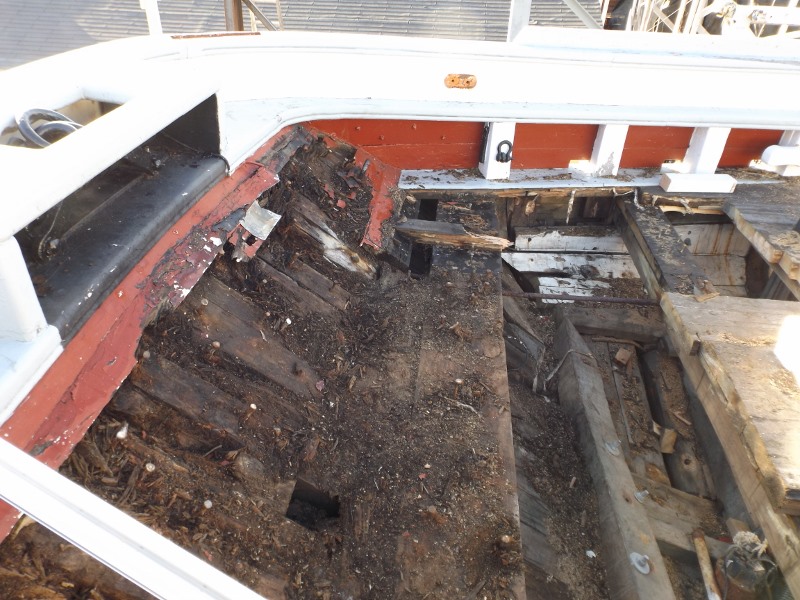 You can see that this structure could not safely withstand the forces of the main sheet tackle on the boom buffer. 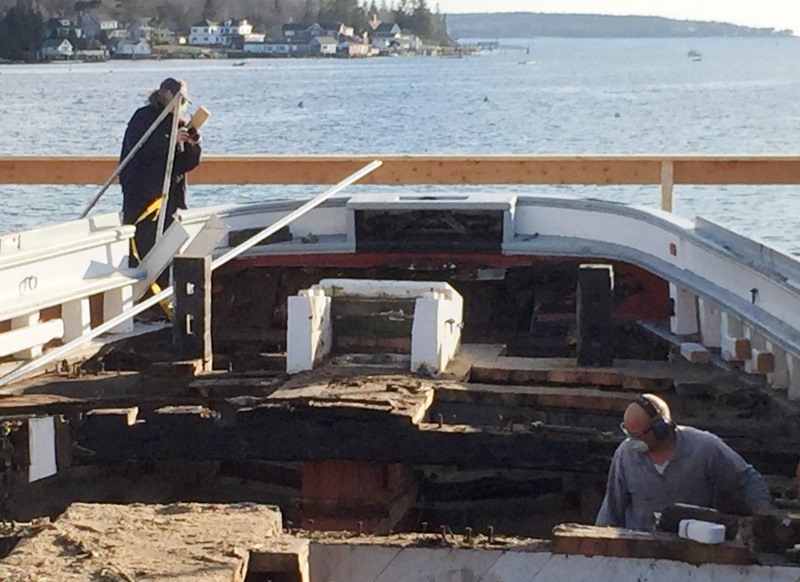 The boom buffer, in the center of the transom, below the rail, absorbs the shock when the ship jibes.

Here is a photo from 1977 when this structure was rebuilt in Cape Verde prior to the ship's return to the US as a gift from Cape Verde. There is no deck structure yet but you can see the transom and the sternpost. 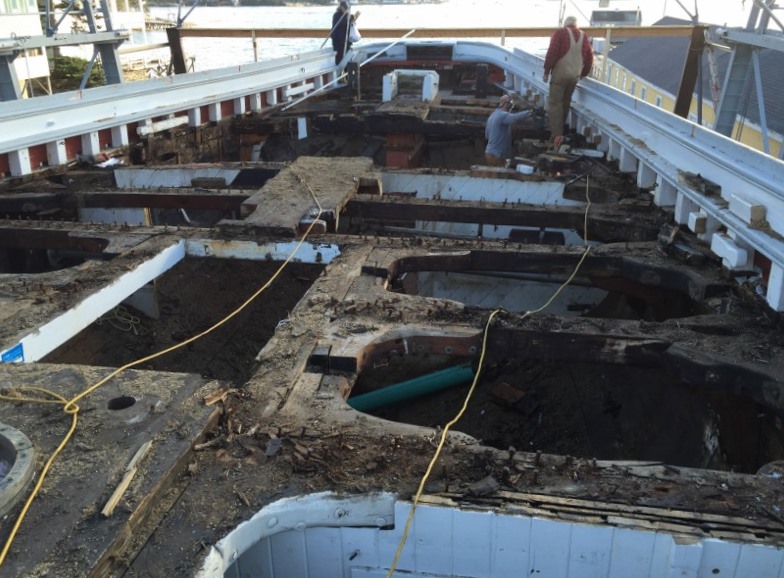 You can read about the efforts to repatriate the Ernestina-Morrissey from 1972-1982 by clicking the dates on the left of the timeline.

By mid-December, 2015, the cover over the ship was complete and as you can see the transom has been removed. 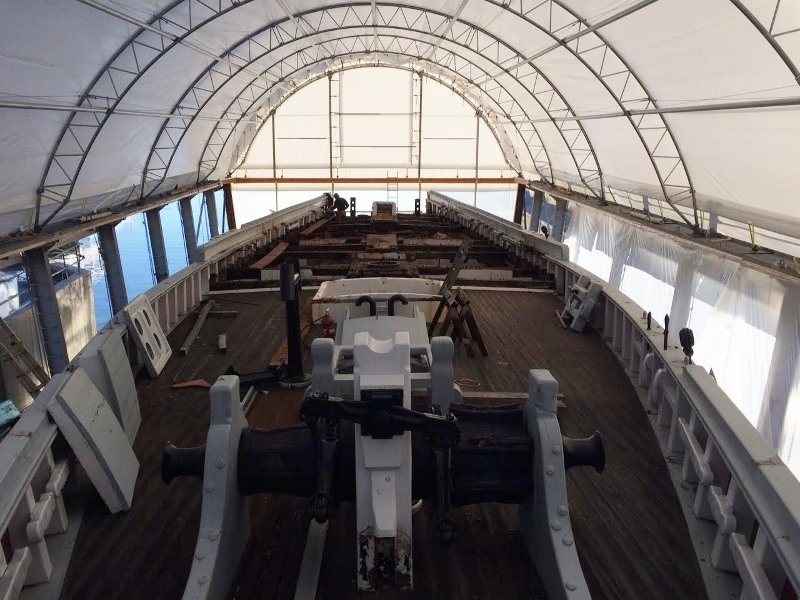 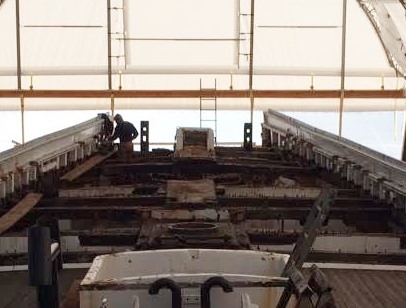 The transom in gone, the quarter-bits stand out against the horizon. photo credit: Boothbay Harbor Shipyard

The boom-buffer, along with other equipment has been safely stored at the shipyard and will be re-installed on the ship.  Did you know that boom buffers were invented by Jacob Edson?   “Jacob Edson formed Edson Corp. to design and manufacture specialty hardware for the commercial marine trade. He invented the diaphragm pump the year the company was formed, and other early inventions included a “boom buffer” to reduce the shock when a sailboat jibes, along with hardware and steering systems for the great Boston area fishing fleets, coastal schooners and cargo vessels.”

We’re not sure if this boom buffer is an Edson design, ( a New Bedford company) but we do know that the two one-gallon-a-stroke bilge pumps are Edson pumps. 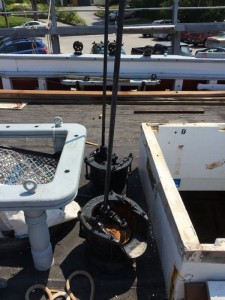 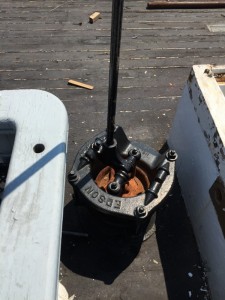