Join us Friday, January 15 for the screening of this award winning movie! 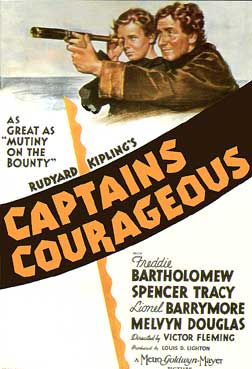 Don’t miss this opportunity to see fishing schooners like Ernestina-Morrissey, then Effie M. Morrrissey, in sailing footage filmed of the Gloucester fleet in 1937.  You will see some of her Essex sisters but not Ernestina-Morrissey. (In 1937 the Morrissey was in the Arctic on the “Bartlett Northwest Greenland Expedition” under the auspices of the Smithsonian Institution and the Chicago Zoological Society.)  The deck scenes and those below in the aft cabin and fo’c’s’le will look very familiar if you have sailed aboard the Ernestina-Morrissey. The hard life of the dorymen of Gloucester is portrayed as you would expect in this 1937 Hollywood movie.  Join us Friday, January 15 for the screening of this award winning movie!

Based on a story by Rudyard Kipling, this classic film from 1937 chronicles the friendship that develops between a rich and spoiled young boy and the hardworking Portuguese fisherman who saves him from a watery grave when he falls off an ocean liner and is picked up by a Gloucester fishing       vessel off the Grand Banks. Directed by Victor Fleming, the film was nominated for four Academy Awards (Best Picture, Best Film Editing – Elmo Veron, and Best Screenplay – Marc Connolly, John Lee Mahin, Dale Van Every) with Spencer Tracy taking home his very first Best Actor Oscar.  This screening is co-sponsored by:  New Bedford Whaling National Historical Park, the New Bedford Fishing Heritage Center, and the Schooner Ernestina-Morrissey Association, Inc.