Forty years ago, as the first chair of the Schooner Ernestina Commission, Julius celebrated the arrival of Ernestina from Cape Verde to New Bedford State Pier. He is celebrating again! 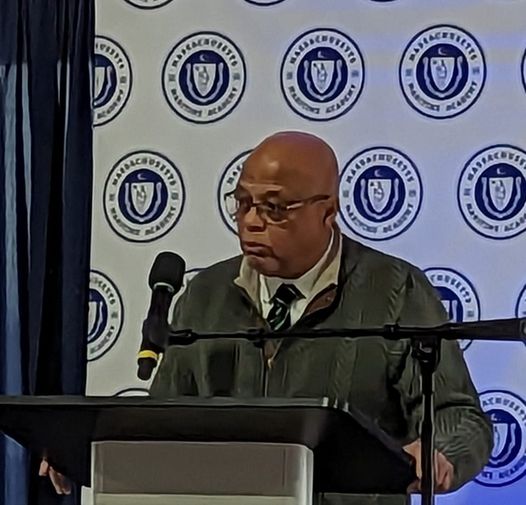 Thank you to the many, many friends and supporters of the beautiful, historic and only “official vessel of the Commonwealth of Massachusetts”- the Ernestina- Morrissey!

Let no one be under any illusion that any one individual, entity or organization restored Ernestina- Morrissey. It has been her soul, her spirit and her dignity that has compelled us all to restore her to her sailing glory.

Since 2008, when SEMA was established, our purpose was to raise funds to provide for the maintenance, equipment, manning, programming, and operation of the Schooner Ernestina-Morrissey as a sail-training vessel, school ship, and education enterprise.

The financial dust has not settled yet, however, SEMA has received in donations and/or administered over 5 million dollars of this restoration.

There are over 50 individuals that SEMA has identified that have donated over $1,000.

Time does not permit me to thank all of the donors, however, SEMA will provide a listing in our annual report due out shortly.

In addition to donations administered by SEMA, The Lenfest Foundation and The Hildreth-Stewart Charitable Foundation granted millions to DCR’s Ernestina Trust for this project.

I also must recognize all the people who volunteered thousands of hours of time over the 15 years since the commitment was made to “Keep Ernestina Sailing” as the bumper sticker that was made then declared! Volunteers have served as Directors of SEMA, as members of the Schooner Ernestina Commission, some have represented Ernestina in song across New England, some by scraping and painting on workdays, helping DCR to maintain the vessel,  as docents for “open ship” for the public and much more.

Thanks also to the Bristol Marine Shipyard at Booth Bay Harbor, Maine, to DCR’s Wendy Pearl and to the Massachusetts Maritime Academy Trustees for accepting the stewardship of Ernestina-Morrissey.

Ernestina Morrissey has been documented by Filmmaker Rick Lopes and son, Alessandro.  The work that they are doing to capture her soul, spirit and dignity is exemplary.  Their challenge, at this point in their work, is to obtain experiences and stories of Cape Verdeans who came from Cape Verde on sailing vessels.

If you have a loved one or know of a Cape Verdean who came on a sailing vessel from Cape Verde to the US, please get in touch with them and tell your story. Their contact information will be on SEMA’s website.

When Ernestina arrived in New Bedford in August 1982, Jose Luis Fernandes Lopes, the Cape Verdean Republic’s ambassador to the United States remarked that the arrival of the 107-foot ship in New Bedford “is more than a tribute to those Cape Verdeans who became the pioneers of our emigration…who demonstrated the utmost courage and perseverance by leaving their beloved country in search of a new life in distant lands,” he said. The ship is “an unmistakable catalyst in fostering a very special bond of friendship and human assistance from one country to another.”

Lopes closed with a wish, that the tall ship riding placidly at pier side “forever sail on the winds of hope, ever to remind us of the boundless possibilities of human understanding and cooperation.”

I am one of many people who have worked to restore the Schooner Ernestina- Morrissey over these nearly 50 years. I have a personal challenge to the Admiral of Massachusetts Maritime Academy, Frances McDonald and any future Admiral, the Captain of Ernestina- Morrissey, Tiffany Krihwan and any successor to her, as well as the trustees of Massachusetts Maritime Academy.

The challenge is to preserve and EMBRACE Ernestina- Morrissey’s DIVERSITY.  ERNSTINA-MORRISSEY is the only tall ship in the fleet of tall ships gifted to the people of the United States from an African country. In my view, if Ernestina-Morrissey’s diversity is EMBRACED, her soul and spirit will EXCEED ALL EXPECTATIONS.

Everyone should challenge their expectations, their comfort zones  and embrace the future!