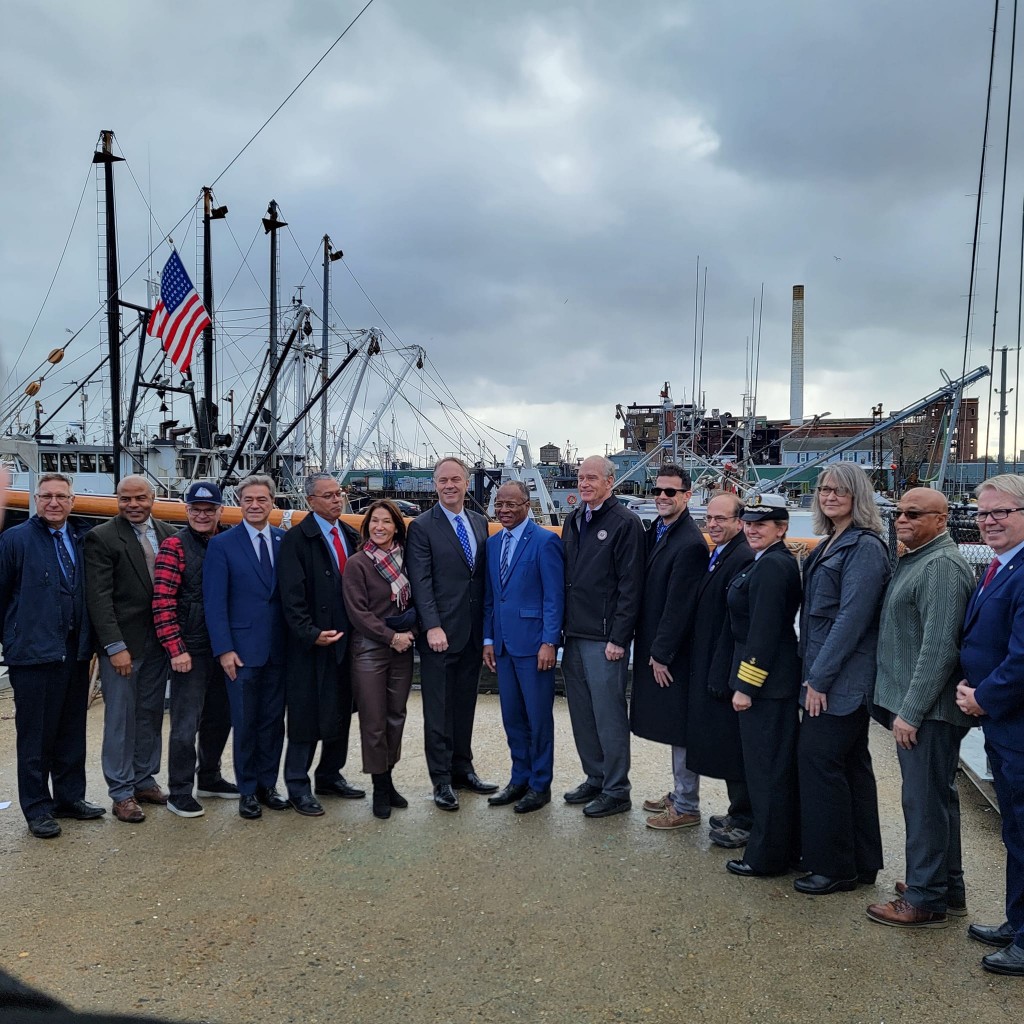 WAREHAM, NEW BEDFORD, MA, ISSUED DECEMBER 19, 2022…Massachusetts Maritime Academy, the Department of Conservation and Recreation and the City of New Bedford, in conjunction with the prime minister of Cabo Verde, Massachusetts Lieutenant Governor Karyn Polito, Consul General of Canada to Boston Rodger Cuzner, and many other state and local government officials, recently welcomed the return of the Sailing School Vessel (SSV) Ernestina-Morrissey with a celebration held on Saturday, December 17, at 49 State Pier in New Bedford.  The vessel was also open for public tours over the weekend.

The Schooner Effie Morrissey was launched in 1894 and for the next 20 or so years carried Gloucester fishermen to the Grand Banks, Labrador, Nova Scotia and Newfoundland. Following that, she served as an arctic exploration ship and then as a supply and survey ship for the U.S. Navy during World War II. In 1948, Captain Henry Mendes purchased the ship and brought her back to life after a catastrophic fire. Renaming her the Ernestina, he then began sailing her as a transatlantic packet, carrying goods and passengers between the Cape Verde islands and the United States through 1965. For years thereafter, she was an important means of inter-island transportation and communication in Cape Verde. After five years of dedicated fundraising and restoration work, in 1982 the Ernestina was given to the people of the United States by the people of Cape Verde in recognition of the longstanding ties between the two countries.

Legislation passed in 2019 returned the Sailing School Vessel Ernestina-Morrisey to her home port of New Bedford, under the care of the Massachusetts Maritime Academy. For years to come, she will serve the Commonwealth – and her citizens of Cape Verdean descent – as an educational asset, teaching upcoming generations about the majesty of the oceans, the history of sail navigation, the strength of the Cape Verdean people, and the ties that bind them all together.

“There has been amazing excitement on our campus and throughout our region thinking about the return of the Ernestina-Morrissey,” said Rear Admiral Francis X. McDonald, USMS, president of the Massachusetts Maritime Academy.  “She has had such a storied past, and to think now about her future of training young mariners in front of her is very powerful.”

Added New Bedford Mayor Jon Mitchell, “Grand Banks fishing vessel, Arctic explorer, packet ship, passenger liner for Cape Verdean immigrants – the Ernestina-Morrissey has left its mark across a broad sweep of American history.  Thanks to the commitment of the Commonwealth, the City, Massachusetts Maritime Academy, SEMA, and inspired philanthropists, it will live on to tell its story right here in its homeport of New Bedford.”

The Honorable Michael Dukakis, former governor of Massachusetts, was unable to attend the festivities, but shared his thoughts on his role with the schooner.  “It was my great privilege as Governor in 1977 to sign the legislation authored by the late state representative Tom Lopes creating the Schooner Ernestina Commission and to appoint Julius Britto as its first Chairman. This allowed the Commonwealth to accept this magnificent gift from the people of Cape Verde. Later in 1983 after she arrived in Massachusetts, I worked with the legislature to provide funding to allow Captain Dan Moreland and his crew to complete the restoration and begin her educational programing, setting a standard that continues to this day. This is a proud day for all those who have labored so long for this great schooner.”

“Recognizing the importance of the Schooner Ernestina-Morrissey and its impact on the Commonwealth’s maritime history, our Administration invested $5 million to restore and ready the vessel to sail at sea once again,” added Governor Charlie Baker. “After 40 years of stewardship, we are proud to help bring the Ernestina-Morrisey home, where she will be utilized as an educational vessel for decades to come.”

“The collective efforts and collaboration between our Administration, state legislators, the Schooner Ernestina Commission, and the Massachusetts Maritime Academy serve as a tremendous example of the dedicated, strong partnerships to ensure the Official Vessel of the Commonwealth returns to navigating the open seas,” said Lieutenant Governor Karyn Polito. “By contributing to the assessment, design, and construction of the Ernestina-Morrissey, we are giving Massachusetts residents and visitors an opportunity to learn about this historic ship.”

The Ernestina-Morrissey also has an important history with the Republic of Cabo Verde.  “The Ernestina-Morrissey is a proud symbol of the unique and enduring connection between the peoples of Cabo Verde and Massachusetts.  Our stories are so richly intertwined, and the wonderful restoration of this vessel – by so many who cared so deeply and gave so generously – boldly affirms the great promise of our shared future. On behalf of Caboverdeans everywhere, I extend my heartfelt gratitude to all that made today possible.”

“The Schooner Ernestina-Morrissey is a treasured gift from the people of Cape Verde that reflects the strong, enduring bond between our nations,” added State Senator Mark Montigny (D-2nd Bristol and Plymouth), who has long-supported capital and operating needs for the Ernestina-Morrissey and successfully led legislation to secure her restoration.  “It is almost hard to believe that after decades of securing millions of state dollars in earmarks and legislation, she is finally back home in New Bedford, fully restored and ready to navigate the open seas.  Our law forever protects this historic vessel and her Cape Verdean heritage, and New Bedford is proudly displayed on her stern.  Today is a special day for our community and the Commonwealth, and I look forward to the day when the Schooner Ernestina-Morrissey can set sail for beautiful Cape Verde.”

State Senator Michael J. Rodrigues (D-Westport), Chair of the Senate Committee on Ways and Means, echoed these sentiments.  “As the official vessel of the Commonwealth, the Schooner Ernestina-Morrissey means a great deal to so many people, and today marks the culmination and a celebration of a long journey to preserve, protect and return this historic vessel to the port of New Bedford, while honoring our state’s strong ties with the people of Cape Verde and our Cape Verdean community here in the South Coast.  Thanks to the hard work and advocacy of Senator Montigny, Representative Cabral and others, we were successful in securing state funding and passing a law to protect this National Historic Landmark, ensuring that the Schooner Ernestina-Morrissey would proudly sail again as a fully restored vessel and serve as an educational asset for our communities and the Commonwealth for many, many years to come.”

State Senator Susan L. Moran (D-Plymouth & Barnstable) shared her thoughts on the schooner’s arrival in New Bedford.  “I cannot think of a more perfectly suited place for the Ernestina-Morrissey to dock and call home,” she said.  “Not only will it be wonderful to have this historic vessel available to the public, but it is touching that the legacy of this ship will live on to educate and train the next generation of sailors.”

“I am proud to help welcome the Ernestina-Morrissey to its next life with the Massachusetts Maritime Academy,” added State Representative Steve Xiarhos (R-5th Barnstable). “This legendary schooner has a rich and compelling history, involving people on both sides of the Atlantic. It is important for us to be able to pass along the stories of this heritage to the next generation, while also creating new adventures for the vessel in the years ahead. This is an exciting day for our Commonwealth.”

“The rehabilitation of the Ernestina-Morrissey is critical to our ongoing conservation efforts for state-managed landmarks and ensures a thoughtful approach and strategy in preserving the Commonwealth’s rich history,” said Energy and Environmental Affairs Secretary Beth Card.  “The vessel’s restoration and homecoming is an exciting milestone for the Baker-Polito Administration and will improve the vital connection to those who came before us.”

Department of Conservation and Recreation Commissioner Doug Rice added, “Over the last 40 years, the Department of Conservation and Recreation has worked to maintain and rehabilitate the Ernestina-Morrissey, the Official Vessel of the Commonwealth.  We are proud to bring this historic vessel home to New Bedford and we look forward to continuing to aid the Massachusetts Maritime Academy in the process to restore this historic vessel to her former glory.”

“The Ernestina-Morrissey captured my imagination the moment I stepped aboard over 25 years ago, a small time in the life of this historic ship,” remembered Bob Hildreth, able seaman and founder and chair of the board of Inversant. “But it was a critical time during which we saw the ship in danger of being hauled ashore to make it into a museum only to appear as a gleaming and seaworthy ship today. I have tried to be there with my treasure at every stage. It is truly a wonderful day!”

Added Jose Couto Centeio, Esq., chair of the Governor-appointed Schooner Ernestina Advisory Board (SEMAB), “When we work together, we can go places and do beautiful things with Ernestina-Morrissey.”

For more information about the SSV Ernestina-Morrissey, please visit https://www.maritime.edu/fleet/ernestina.

About Massachusetts Maritime Academy (MMA): MMA is a fully accredited, four-year, state university offering Bachelor and Master of Science degrees that are highly regarded in the worldwide maritime industry and beyond. For more than 100 years, MMA has prepared students for exciting and rewarding careers on land and sea. As the nation’s finest maritime college, MMA challenges students to succeed by balancing a unique regimented lifestyle with a typical four-year college environment. Located on Cape Cod, at the mouth of the scenic Cape Cod Canal, Massachusetts Maritime Academy is the ideal college to pursue the love for the ocean, concern for the environment, interest in math and science, and a thirst for adventure. Follow MMA on FB:  @massmaritime, @MassMaritime.Advancement; IG: @massmaritime, @mmacademyalumni; Twitter: @MMAadmissions, @MMAcademyAlumni; YouTube: Massachusetts Maritime Academy.

← A Message From SEMA   |   Celebration Remarks from Julius Britto →