BUZZARDS BAY, MA – February 22, 2021 – The Massachusetts Maritime Academy (MMA) is pleased to announce Tiffany Krihwan as the new Captain of the 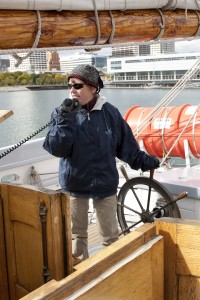 Schooner Ernestina-Morrissey, the renovated tall ship is expected to arrive at the Cape Cod campus in the Fall of 2021.

Krihwan joins the MMA staff from Discovery World in Milwaukee where she was Director of Marine Operations since 2014 and Senior Captain of the Denis Sullivan, a 19th-century Great Lakes schooner, since 2008.

“We’re adding a proven leader to our ranks, and I’m looking forward to seeing Captain Krihwan at the helm of the Ernestina-Morrissey,” said Rear Admiral Francis X. McDonald, USMS, President of the Massachusetts Maritime Academy. “We’re excited to have a Captain of Tiffany’s sailing experience, leadership skills and passion for our program aboard.”

An Erie, Pa., native, Krihwan took up sailing FJs (The International Flying Junior,  a sailing dinghy) at the age of 10 at the Erie Yacht Club. She began sailing tall ships in 1997 when she was appointed Chief Mate of the Appledore IV. Other leadership positions include Captain of the Boston-based schooner Roseway, Chief Mate of the Pride of Baltimore II, Relief Captain of the Los Angeles-based brigantine Exy Johnson and Captain of the tall ship Unicorn.

“It’s an honor to be joining MMA and captaining the Ernestina-Morrissey. It’s hard to 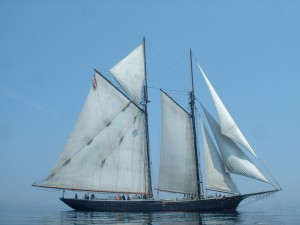 beat the beauty and grandeur of tall ships,” said Krihwan.

Drawn to the position at MMA by the Ernestina-Morrissey’s history and pedigree, Krihwan is looking forward to guiding the ship and her crew on the waters off Cape Cod. “I’ve sailed on a few Grand Banks Fishing Schooners, the Lettie G. Howard and Roseway, over the years and love the way they sail so effortlessly. They are amazing sailing vessels,” she said.

With the Ernestina-Morrissey, Krihwan is eager to start a sail training program from the ground up and help integrate a tall ship into MMA’s curriculum. “This is such a special opportunity not only for me, but for the cadets,” she said. “Working with these historic vessels helps individuals become far better sailors. You really need to observe the fundamental principles of sailing.”

She also will have an important role in teaching the cadets at the Academy and mentoring them to become leaders. According to Krihwan, her leadership style is to lead by example 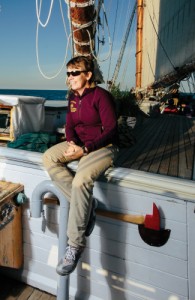 and believes a captain is only as good as her crew. Her hope is to not only share her love of tall ships with the cadets but also pass along skills that are important on sea and land.

“One of my favorite aspects of sailing a tall ship is seeing the crew and students personally grow from the experience and witness their confidence in themselves develop during their time aboard the ship,” Krihwan explained. “My hope is that they take the experience with them and apply the skills and attributes learned at sea to their shore life.”

Krihwan will be relocating to the Cape Cod area with her 11-year-old daughter. In her spare time, she plans to continue the restoration of the “Mahanna,” her wooden 30′ Tahiti Ketch.

year, co-educational state university offering Bachelor and Master of Science degrees that are highly regarded in the worldwide maritime industry and beyond. For more than 100 years, MMA has been preparing women and men for exciting and rewarding careers on land and sea. As the nation’s finest co-ed maritime college, MMA challenges students to succeed by balancing a unique regimented lifestyle with a typical four-year college environment. Located on Cape Cod, at the mouth of the scenic Cape Cod Canal, Massachusetts Maritime Academy is the ideal college to pursue the love for the ocean, concern for the environment, interest in math and science, and thirst for adventure.

Massachusetts Maritime Academy has implemented a comprehensive COVID-19 spring return plan and is committed to four main priorities during these challenging times. These priorities are: To keep our cadets, faculty and staff – and by extension, their families – safe; To keep the Academy from becoming a mass-transmission center; To find a path to get our 1/C cadets (seniors) to degree completion in time for Commencement; and To minimize the academic disruption for the 2/C, 3/C and 4/C cadets (underclass students). The full COVID-19 dashboard and plan can be found at: https://www.maritime.edu/covid-19-dashboard