Julius Britto, President of SEMA, stated; “We are enormously grateful to The Manton 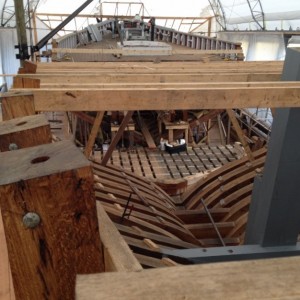 Looking forward from the transom at the level of the weather deck. The aft "deck beams" are just temporary bracing. credit Phil Smith

Foundation for approving this most generous grant at such a critical stage in our campaign. The challenge gives SEMA a powerful catalyst to raise the $750,000 needed to complete the project. We are also grateful to the Commonwealth of Massachusetts and numerous private donors who already contributed $5,550,000 to the project, which launched in 2015.”

The Ernestina-Morrissey is a National Historic Landmark Vessel and the Official Vessel of the Commonwealth of Massachusetts. She was launched in Essex, Massachusetts in 1894 as a Grand Banks dory fishing schooner and subsequently made 20 voyages as an Arctic exploration vessel under the legendary Captain Bob Bartlett.  The Ernestina-Morrissey was then purchased by Captain Henrique Mendes, who used her as a trans-Atlantic and inter- island Cape Verde packet.  She was rebuilt and presented to the United States and the Commonwealth of Massachusetts by the Republic of Cape Verde as a living symbol of the connections between the two countries, and served as an ambassador for the Commonwealth, a sail training vessel, and sea classroom before becoming a shore side exhibit in New Bedford.

Upon completion of the most recent renovation, currently underway in Boothbay Harbor, 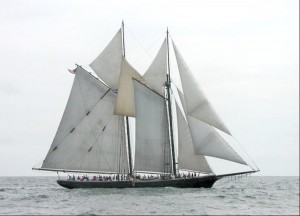 Maine, the hull will meet Coast Guard standards for an “Ocean License,” a necessary requirement for the Massachusetts Maritime Academy to add the vessel to its fleet. Thus, the Ernestina-Morrissey can begin yet another chapter in her remarkable life: training new generations of mariners, continuing to provide public programing, and serving as a sailing ambassador for the Commonwealth and our maritime heritage.

Anyone interested in helping SEMA meet the match can use the Donate button at the right.