Ernestina-Morrissey, Re-dedicated, Prepares for Next Chapter 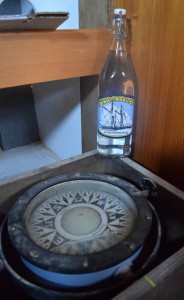 The bottle of mingled waters on Ernestina’s newly-restored aft-cabin compass. With the taste of those waters and this compass the vessel will know where to go!

celebration of Ernestina-Morrissey launch no matter how distant they were. We asked them to collect water from oceans and seas, bays and ports, that represented the diversity of all of Ernestina-Morrissey’s history.  Containers of water came from near and far and are listed as they came in.  The water listed at the top of the post is the most recent.  When the first list got too long, we started another. The water will continue to be used in celebrations as Ernestina-Morrissey visits various ports.  We co-mingled all of those waters which were used to re-dedicate Ernestina-Morrissey when she was launched in August.

Early on the morning of August 29, 2022 Captain Tiffany Krihwan (with the water) and Chief Mate Susannah Winder (with the dedication), gathered on at the bow to begin the celebration of Ernestina-Morrissey.  THIS VIDEO lets them share the moment with you.  You may have to open the download in a new window.

Here is the text of the dedication:

Today is the beginning of a new life and adventure for the Ernestina-Morrissey, the 5th chapter in a remarkable story of missions and voyages. In her previous chapters as a Fishing Vessel, Arctic Exploration vessel, a trans-Atlantic and Inter- Island Cape Verdean Packet, and an Ocean Educator she has sailed on many Oceans, Seas, Bays and Sounds and into many harbors and anchorages. As a way of welcoming her back to the water The Schooner Ernestina-Morrissey Association invited people familiar with her travels to collect  water from the various areas where she has sailed. The response has been extraordinary as the list of places and people I can share with you here today, and which is on the SEMA website, shows. SEMA nearly 50 samples collected from near and far! A small sample from each place has been combined in this bottle to be poured upon her bow as she returns to her element.  Symbolically it’s a way for her past lives to welcome her to her new one.

With great gratitude to everyone who has participated, and to all whose financial support and shipbuilding and outfitting skills have gotten us to today it is my honor and pleasure to do so now.

← Ernestina-Morrissey Is Launched!   |   Monday August 29 at the Shipyard →