The exciting and positive letter below from Andy Tyska, President of Bristol Marine, describes the current status of the Ernestina-Morrissey project.

The complications Covid created for us all over the past two years also had a significant impact on the cost and timing of finishing the Ernestina-Morrissey project. Successfully responding to these challenges has required the collective collaboration, communication, and creativity of all the parties involved. By providing donations of in-kind labor, required materials, and equipment the Department of Conservation and Recreation, the Massachusetts Maritime Academy, and the Shipyard have worked tirelessly to find ways to reduce the overall costs without compromising the quality of the project .

SEMA has reached out to previous supporters to fund the remaining costs. Thanks to the efforts described above, renewed support from the Hildreth-Stewart Foundation ($115,000), the H.F. Lenfest Foundation ($100,000), and Morley Crapo Hyde Eccles Fund of New Bedford ($85,000), and a Manton Foundation‘s $300,000 match of these three donations, the funding required to complete the project has been secured!

Soon the Ernestina-Morrissey, truly The Phoenix of the Seas, will indeed sail again!

Dear Supporters of the Ernestina-Morrissey,

structure was removed from the rail car. Installed nearly seven years ago, under this cover thousands of hours have been spent by the world’s best shipwrights restoring the Ernestina-Morrissey.  The removal of the cover anticipates the installation of the newly crafted, historically correct masts and booms using wood from a tree that was a mere sapling when the Ernestina-Morrissey was

launched in 1894.  The masts will be stepped next week, held in place with new meticulously spliced traditional standing rigging, and some of the

most beautiful custom handcrafted metalwork on top of the mast will then be towering above the water below.

After the installation of the custom gold-plated bolt used to fasten the grounding dynaplate underwater, all hull penetrations will be complete and in six weeks we will launch the Ernestina-Morrissey.  The bolt is an

example of the detail and level of customization found throughout the vessel, most which will go unnoticed, and unmatched in every other vessel of this type.  Much of what has gone into the ship cannot be bought, and must be made.  The individuals who have accomplished these tasks possess unique talent.

Thank you for your continued support to make the Ernestina-Morrissey sail again.

Since we received Andy’s letter the work has continued. As of August 23, you can see below the bowsprit is now in place. In the next two weeks the rigging and mast will be raised and then launching will be scheduled.  (see posts below) 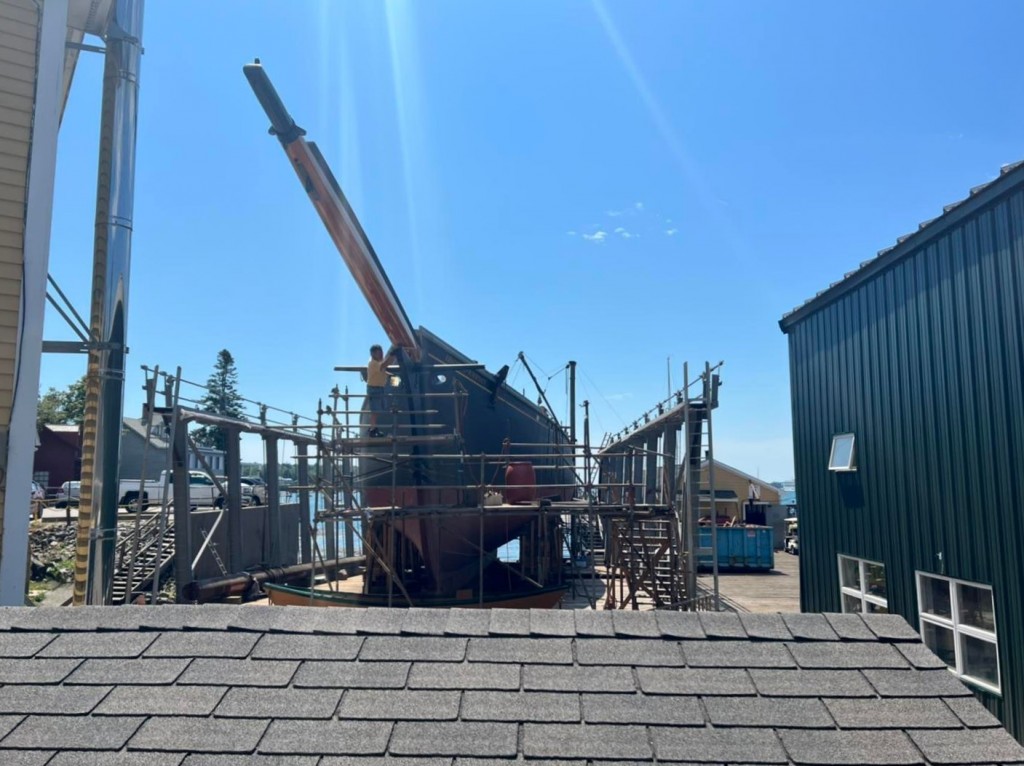 This entry was posted in Fundraising Committee, Maintenance and Operations Committee, News. Bookmark the permalink.

← A Visit to the Shipyard   |   Ernestina-Morrissey Is Launched! →