A Visit to the Shipyard

On Monday August 22 Mary Anne McQuillan and Fred Sterner visited Boothbay Harbor Shipyard to see the progress and deliver tee shirts to the crew. Since 2015 they have visited many times and it is wonderful to see her almost ready to go!

On Friday the crew posted a video walk-thru on their Facebook page HERE. If you can access Facebook.  Amazing to see the progress in just four days! 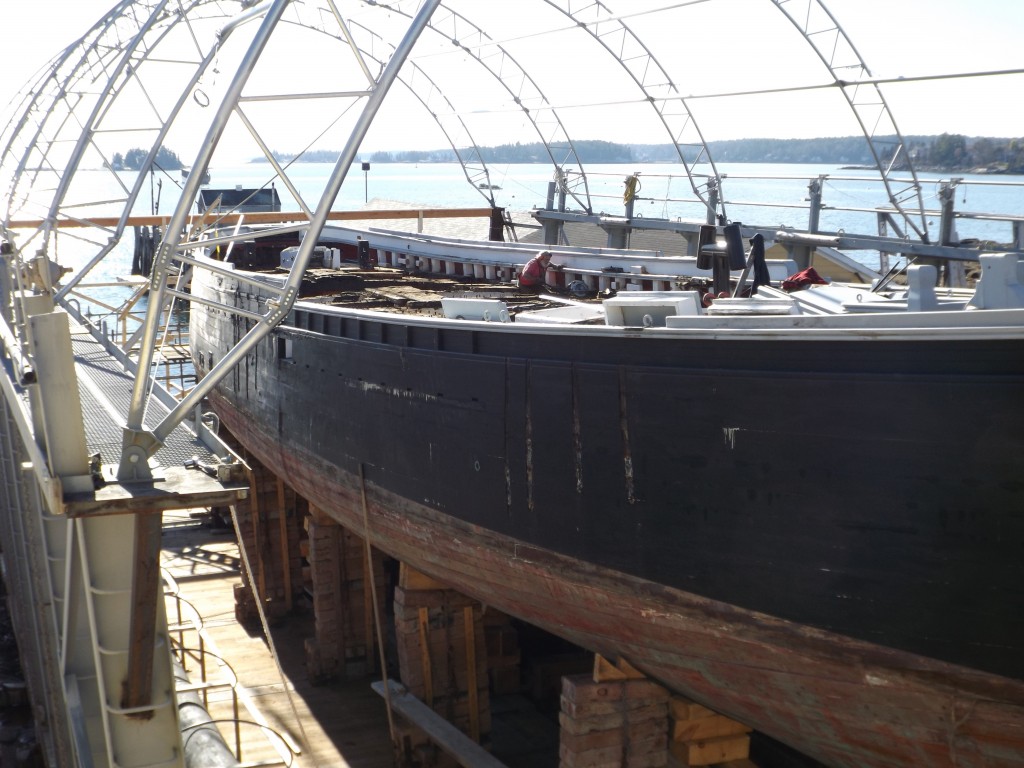 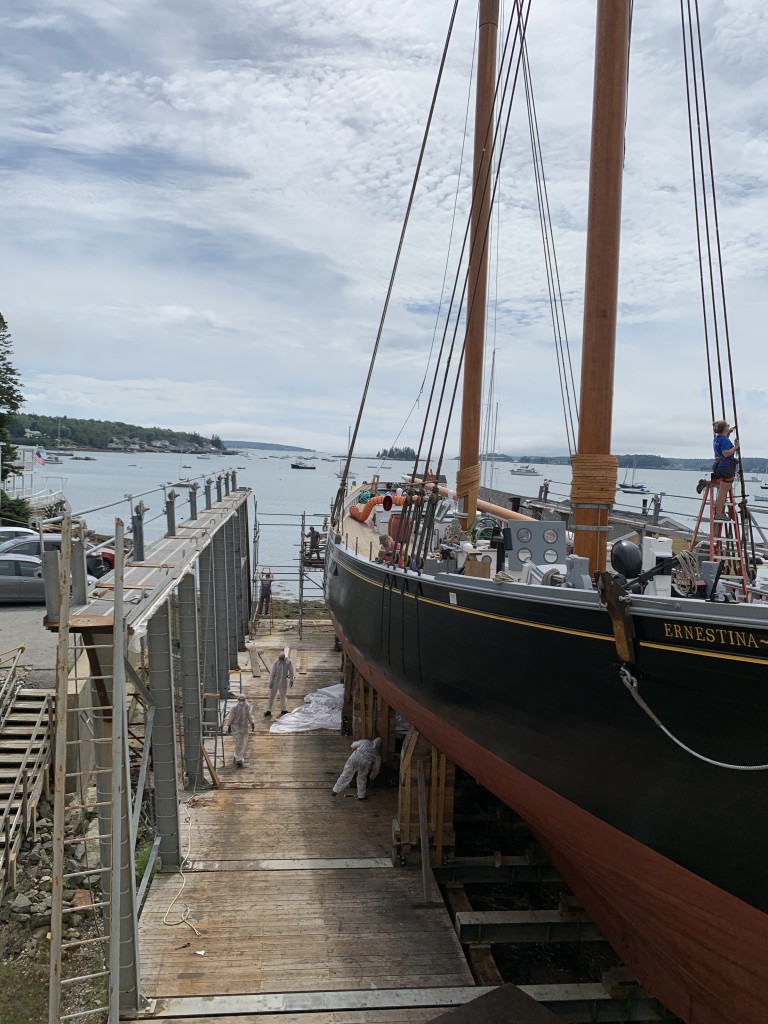 New masts are stepped, the rigging is being tensioned and the blocks will be hung for the running rigging. The interior is being finished, work continues despite continuing "supply chain" issues.

Here are some random images that caught our attention:

The masts have been stepped and next is finishing the rigging. 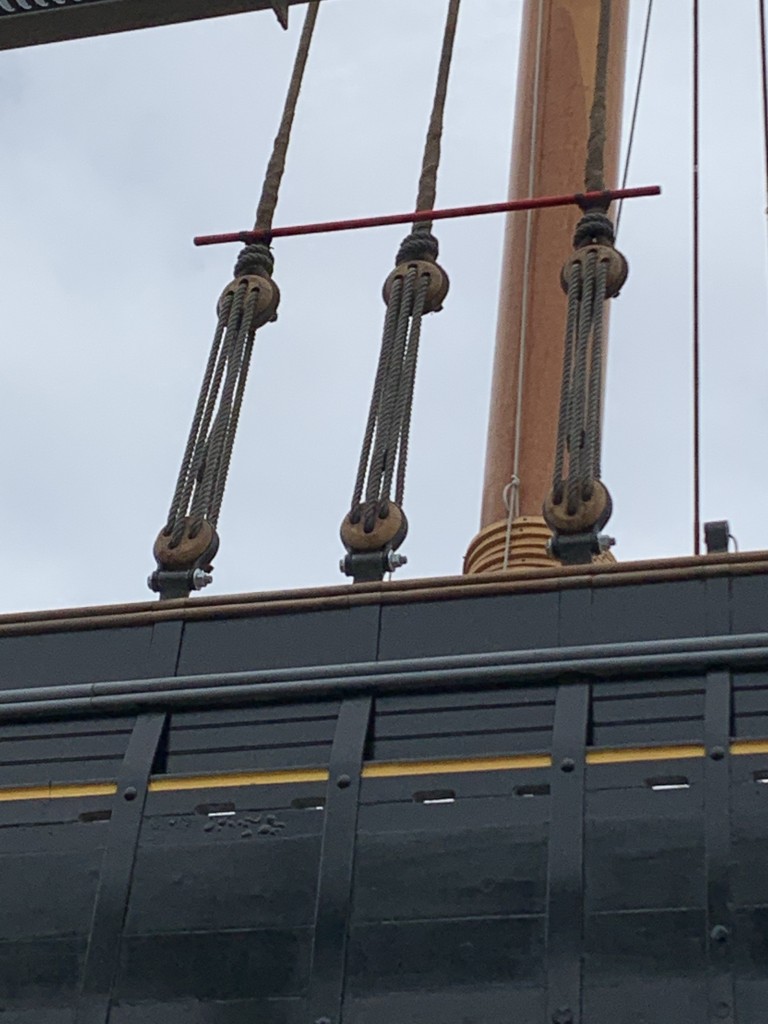 The deadeyes are in place and the ratlines are next. 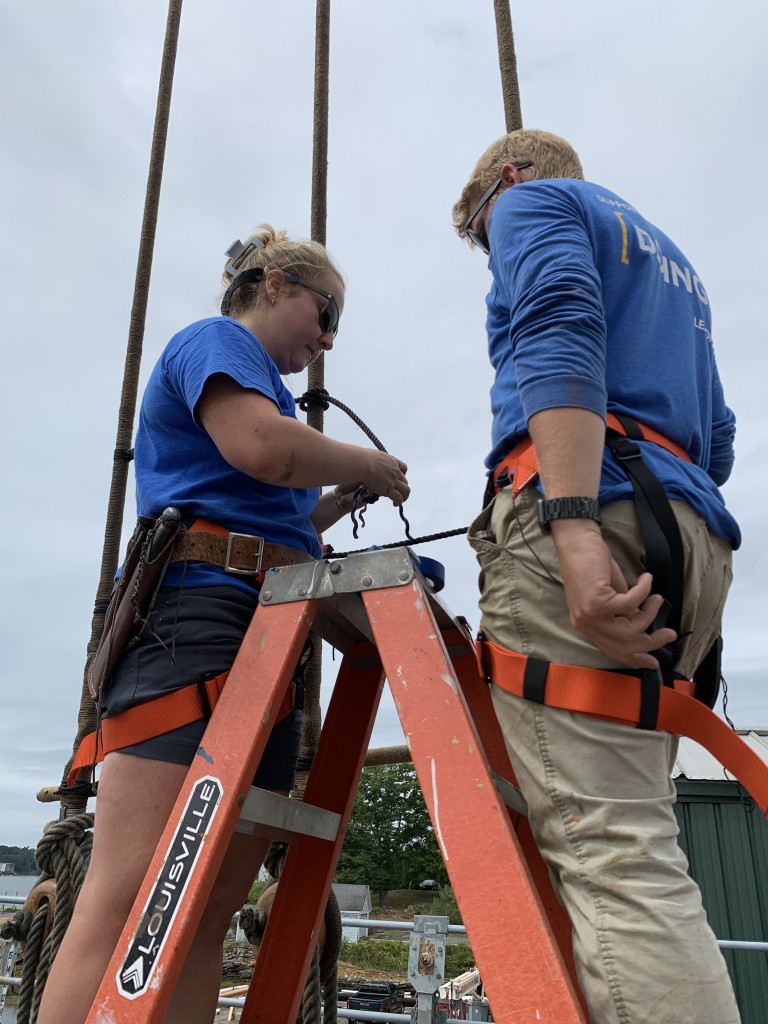 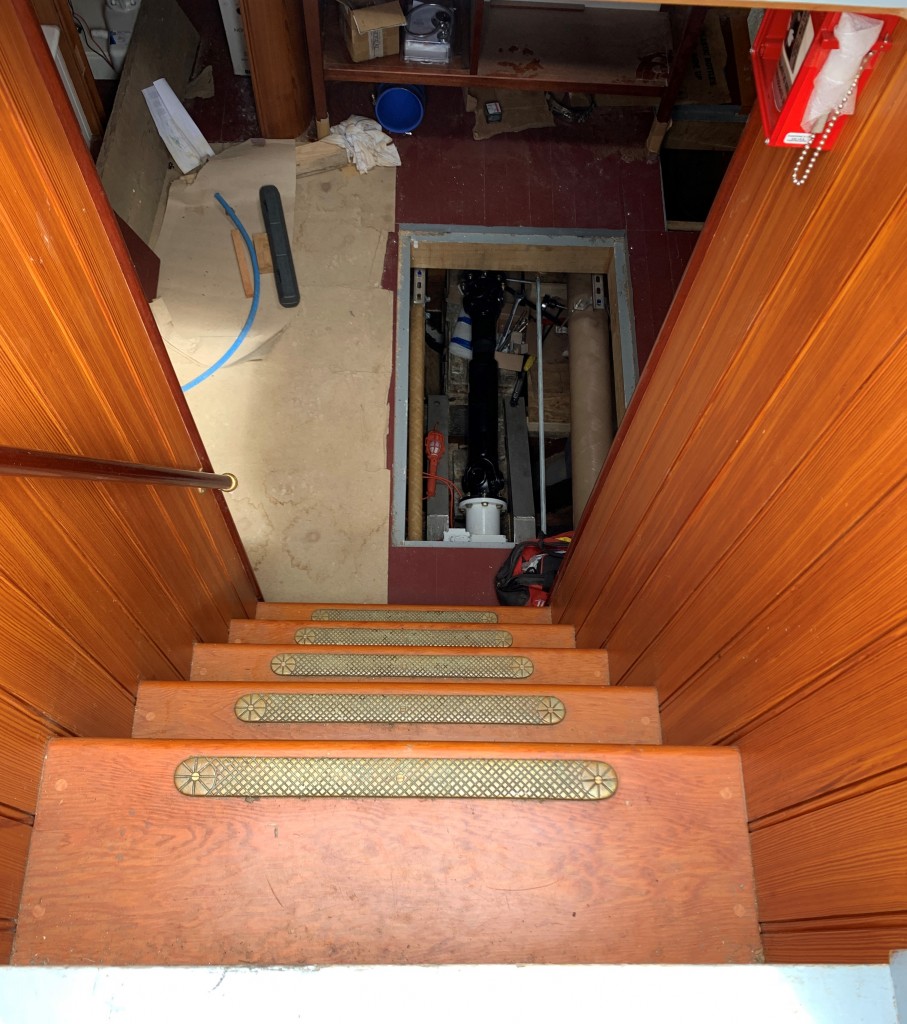 Access to the new drive train under the aft cabin sole. 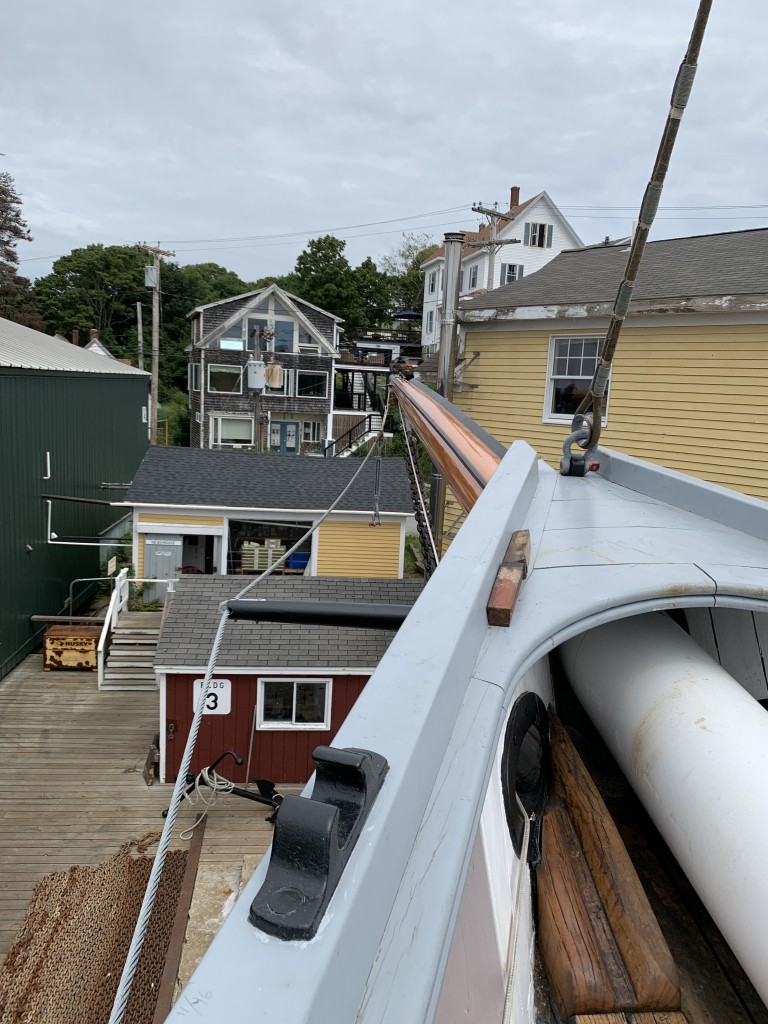 Bowsprit. Red building #3 contains the machinery to run the railway. 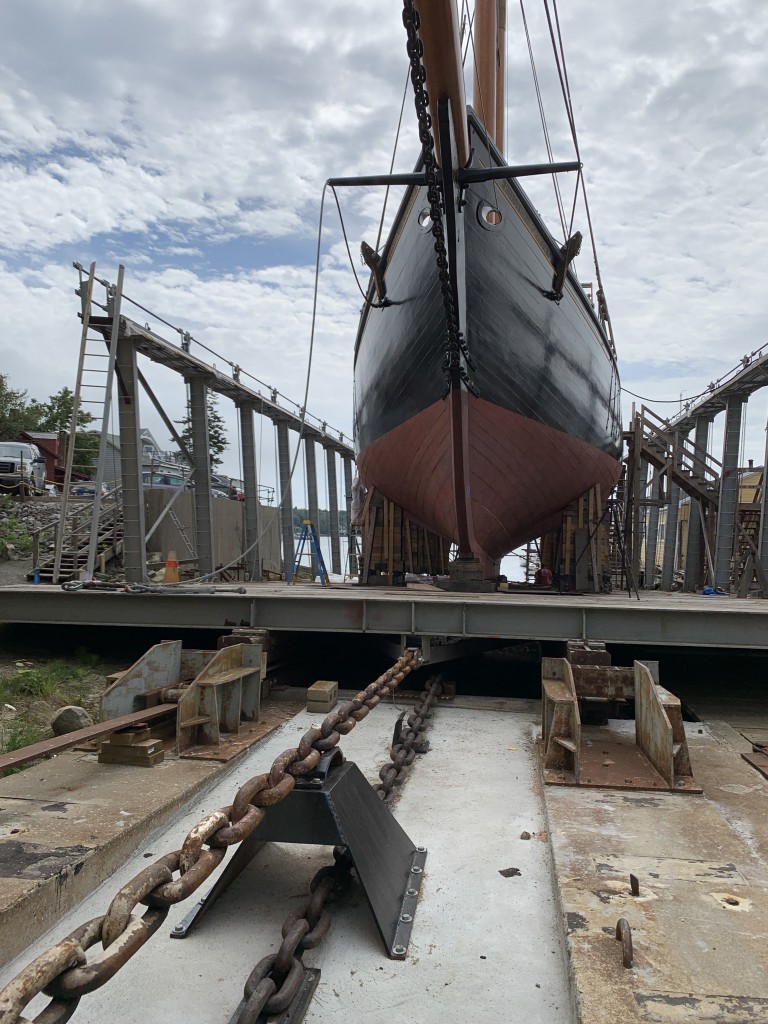 The chains from Building #3 pull up and let down the car that carries Ernestina-Morrissey on the railway. 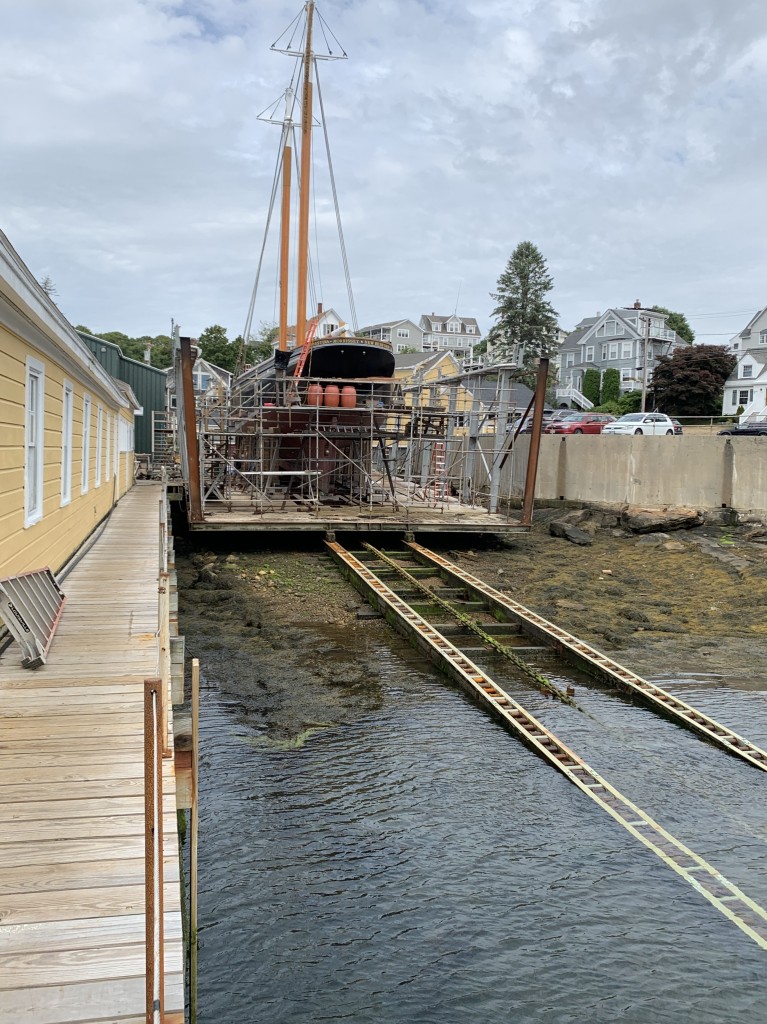 Ernestina-Morrissey will launch stern first. The car will be let down the railway which, during very low tides in early Spring, was been inspected and tuned up in preparation for the launch. 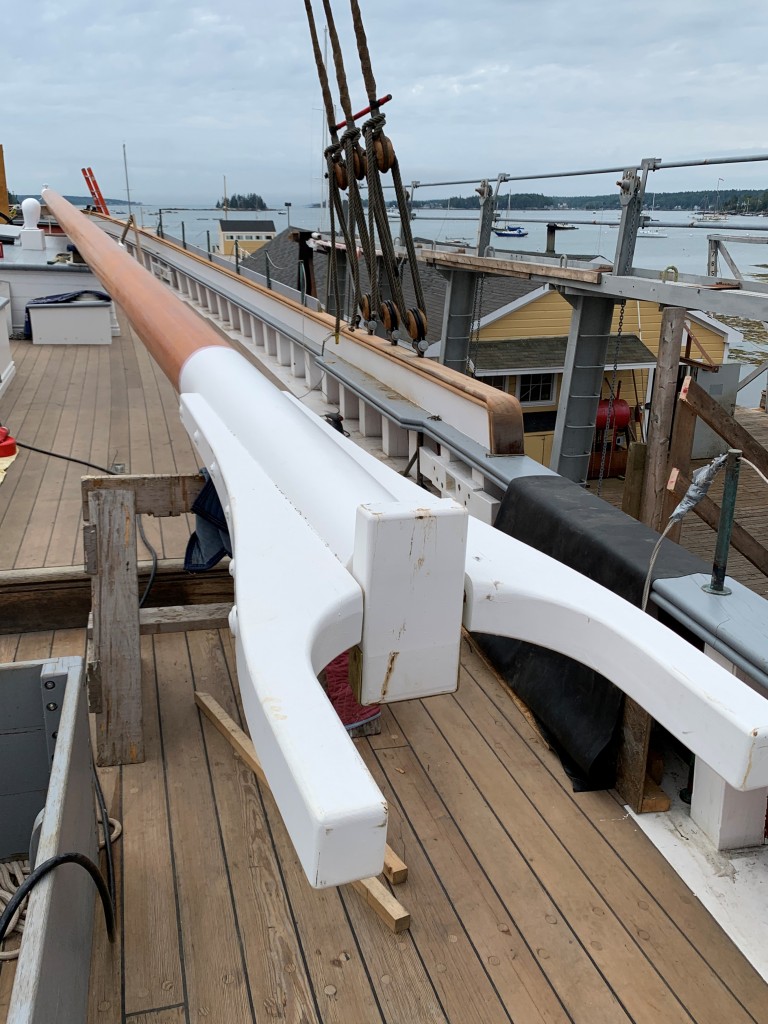 The crane lifted the heavy main boom onto the deck on mast stepping day. 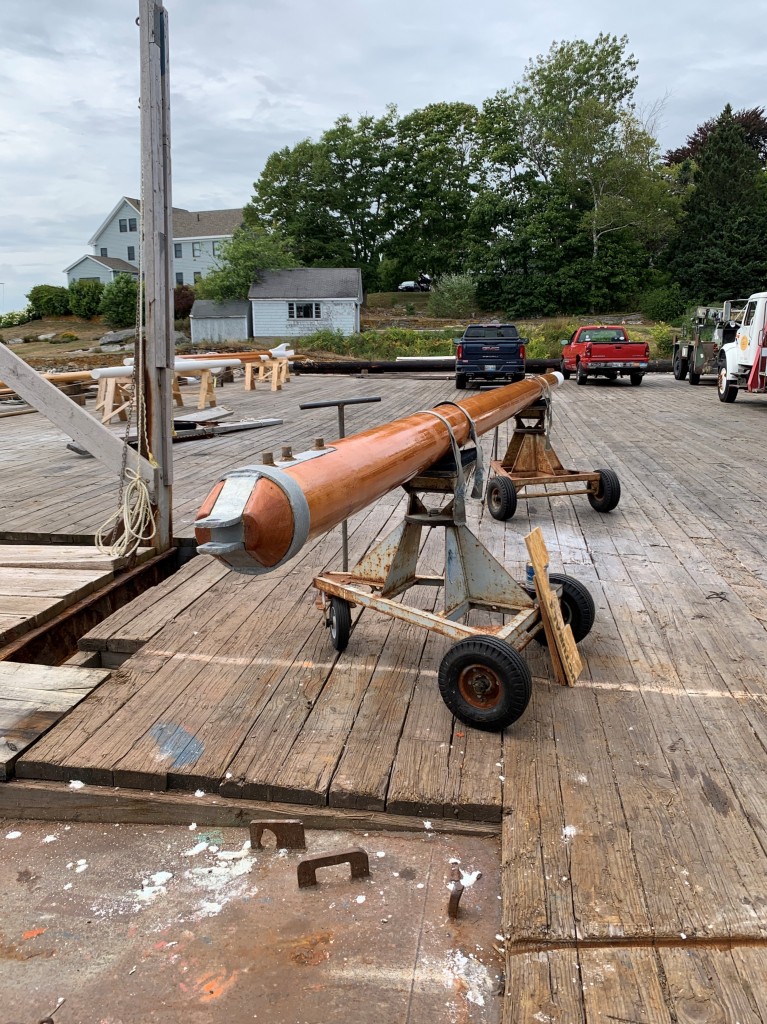 The fore boom will be loaded later, the new hardware is being fastened to the spar. 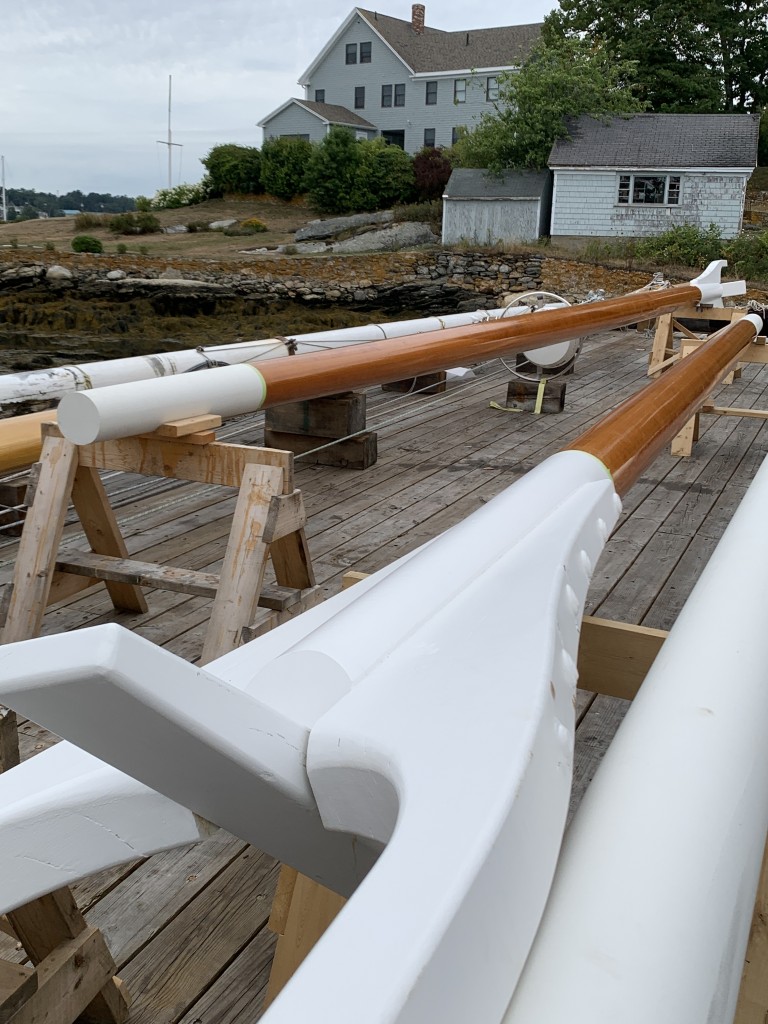 The main gaff, with the jaws at the far end, the fore gaff and in the corner the club for the jumbo. All waiting for hardware. 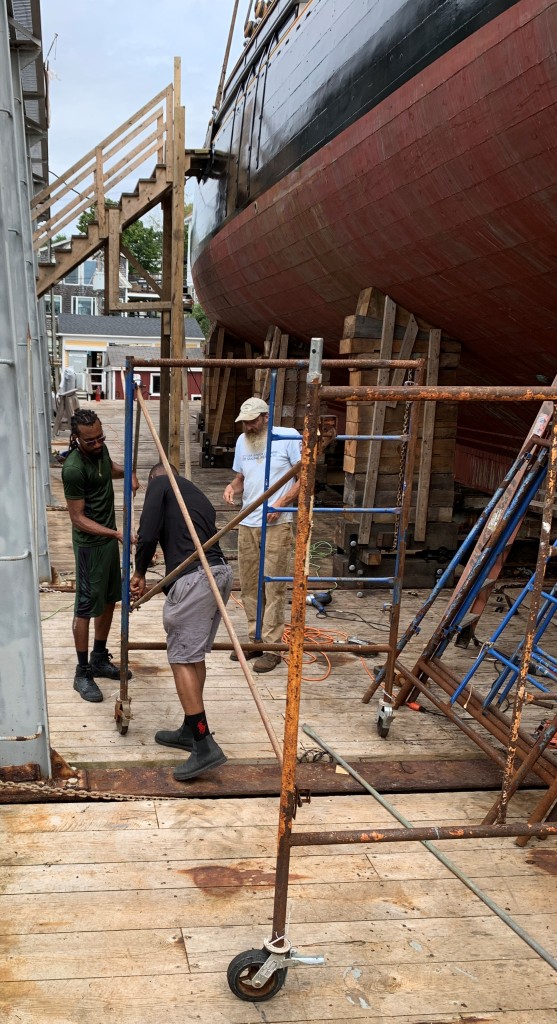 One project that must be completed before launching is applying a fresh coat of bottom paint. The staging will make the job easier. 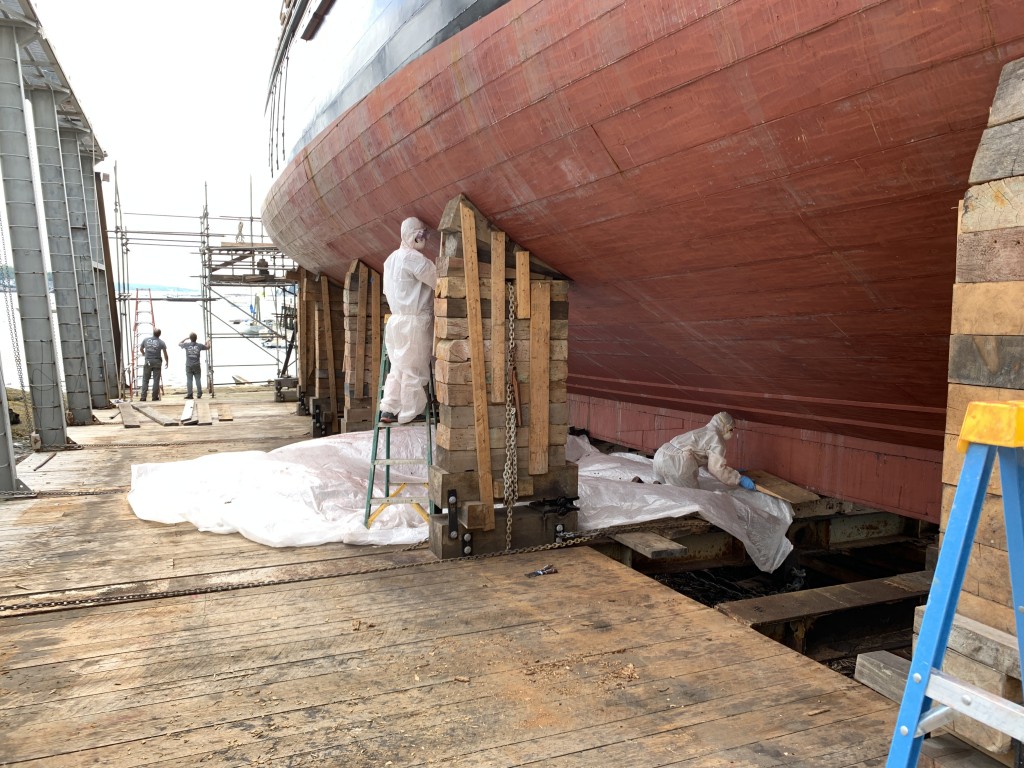 Meanwhile Captain Krihwan has assigned some of her crew to sand the bottom. They will do the painting too.

There is a lot of work going on in each of the holds. But you can see how the fo’c’s’le table looks now that the foremast is in place. 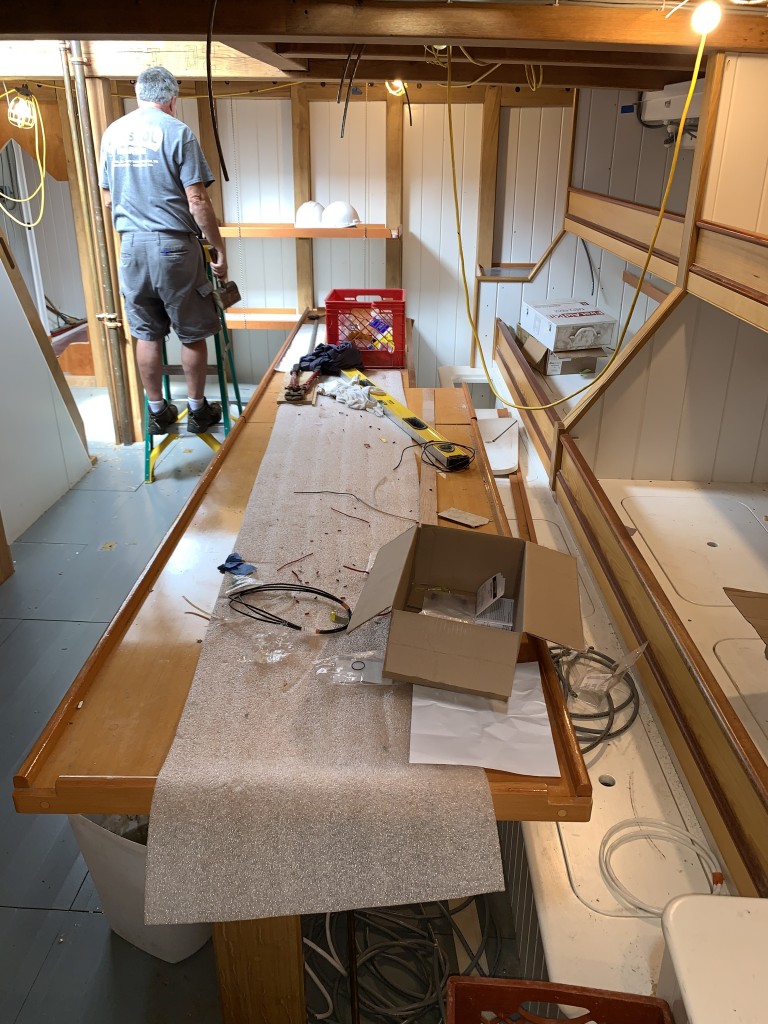 Folks familiar with the Ernestina's layout will notice the biggest change in the configuration of fish hold. Here's a new table. 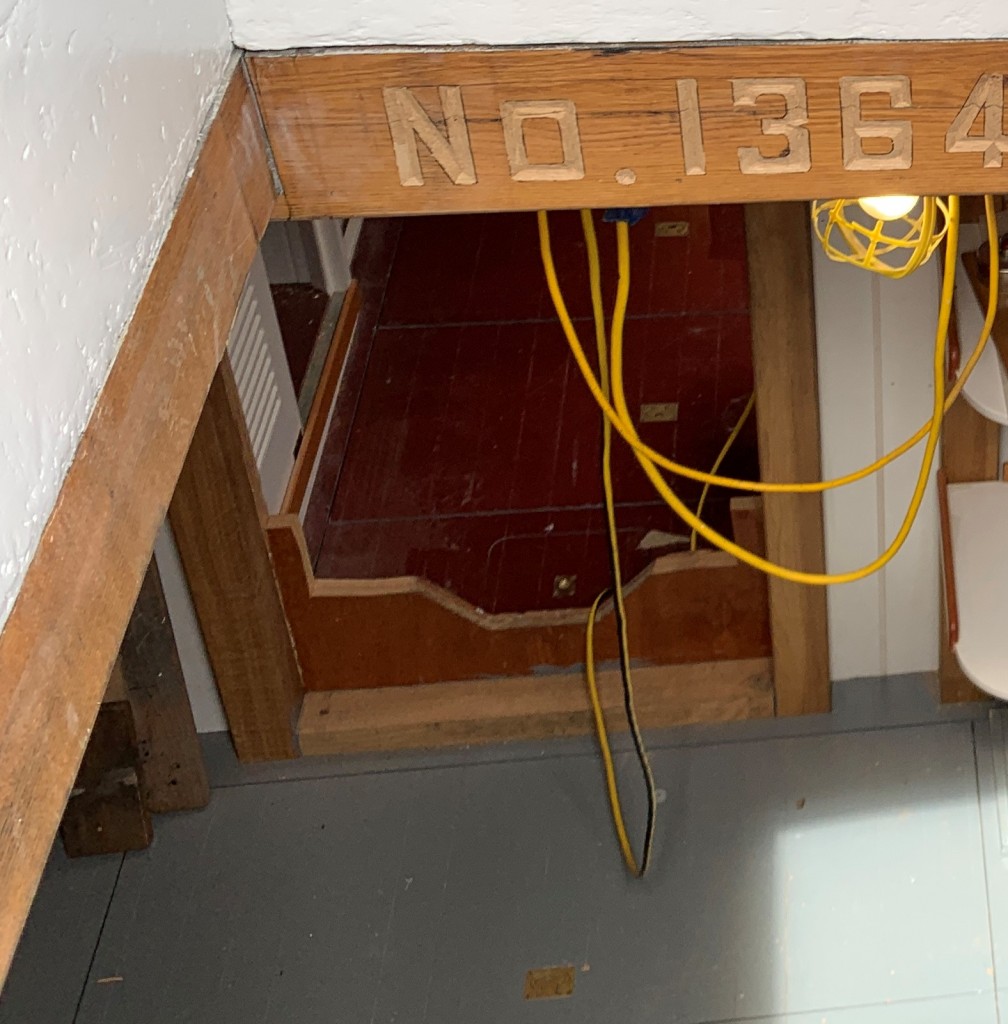 Another change folks will notice is watertight doors between all the holds. This photo was taken from on deck so you only see the bottom half of the opening. This is between the fo'c's'le and the fish hold. The opening is ready but the doors haven't come yet. 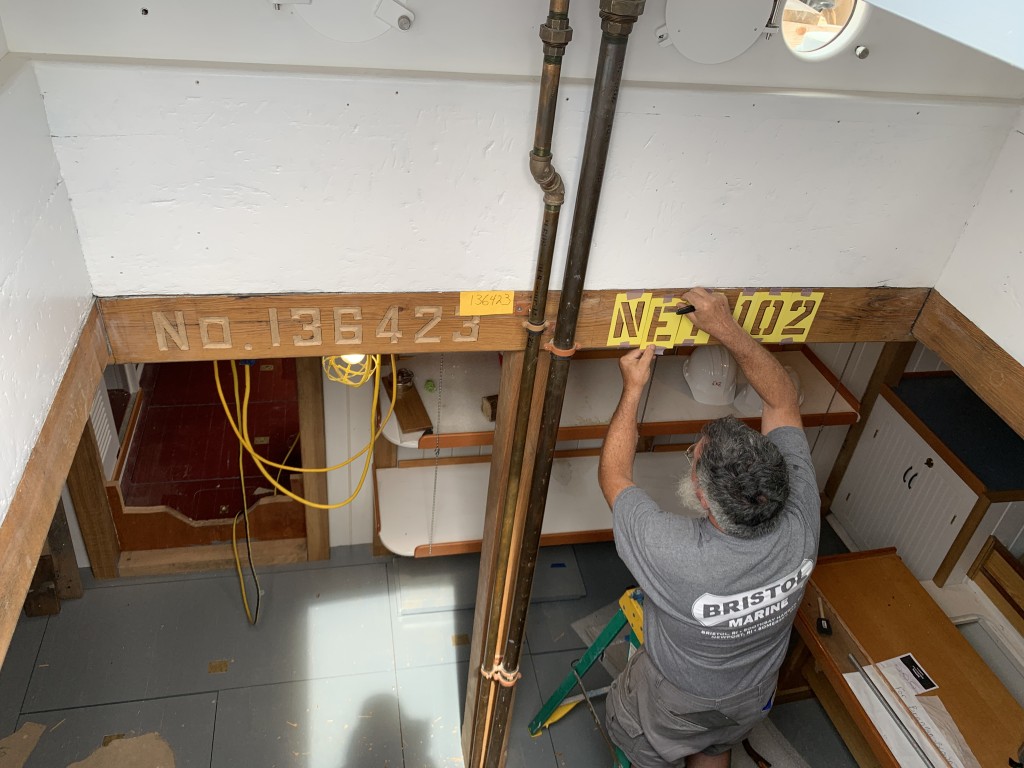 As required, David Short is carving the documentation numbers into the main beam. This is the same number Effie M. Morrissey was given in 1894! 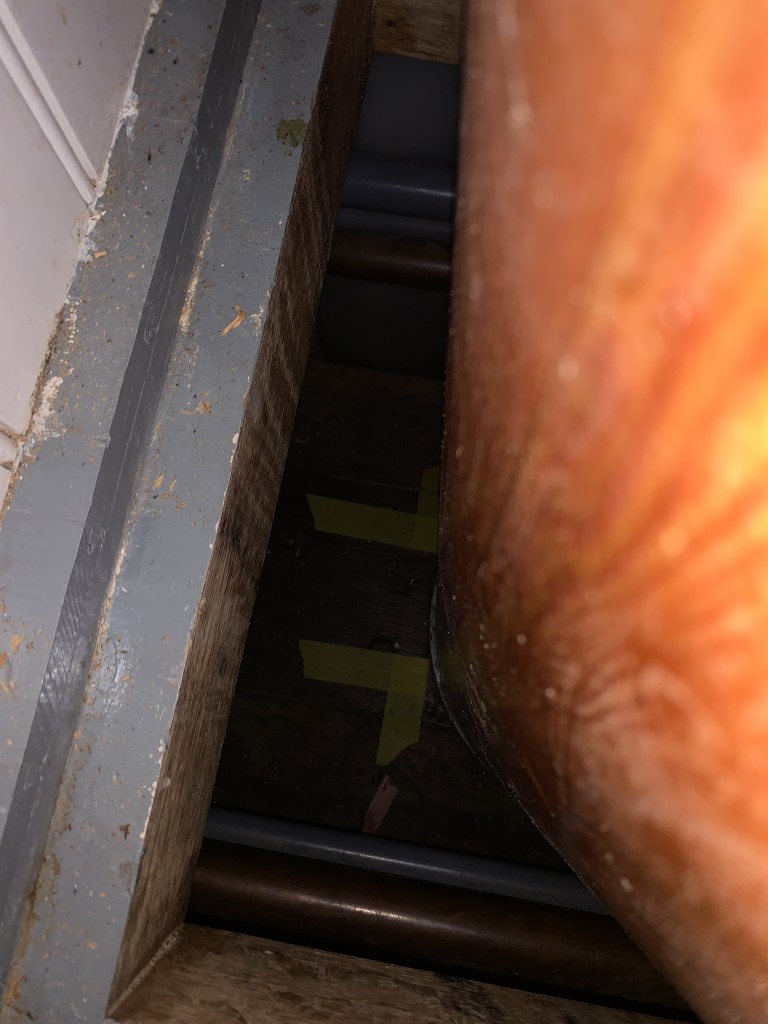 We checked the boat from top to the main mast bilge! The tape was to help guide the mast into the pocket in the step. 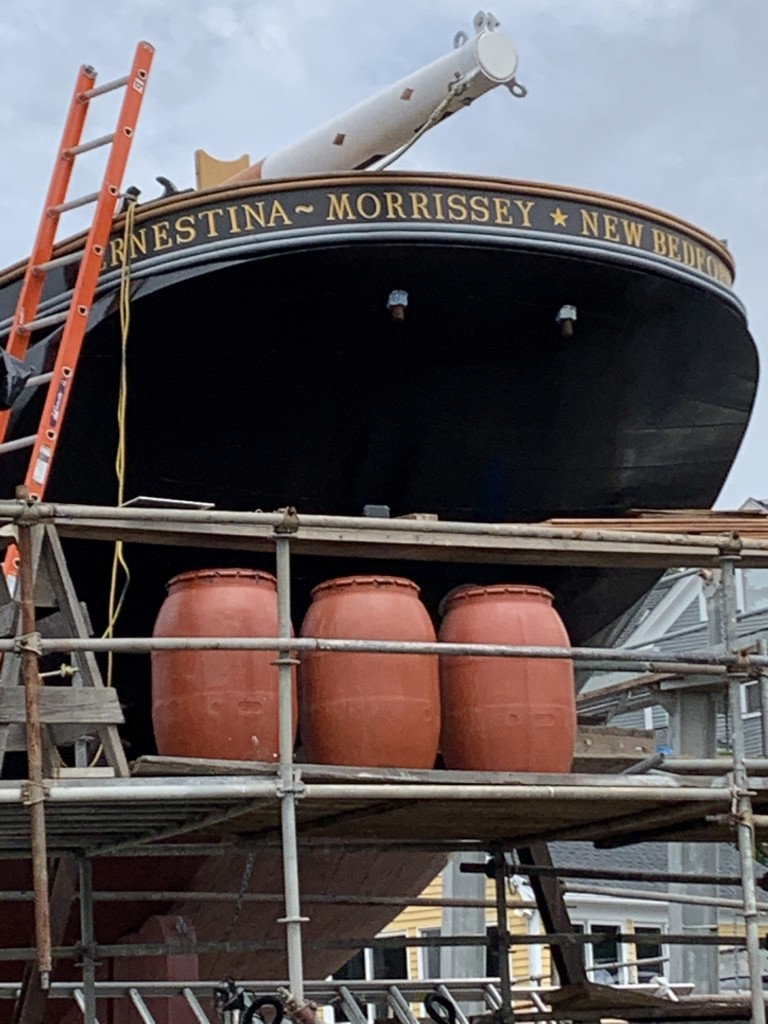 Ernestina-Morrissey is not ready yet but soon she will be sailing the waters of Buzzards Bay, proudly returning to her homeport, New Bedford! And in the Spring of 2023, sailing to Commonwealth ports and some of the other waters she has known. under the careful stewardship of Massachusetts Maritime Academy!