We are nearing the 37th anniversary of Ernestina-Morrissey’s return to Massachusetts as a gift to the people of the United States from the Republic of Cabo Verde.  John Braman recently sent us this story about some of the efforts to make that return possible.  He was the “Representative of Friends of Ernestina” in Cape Verde, funded by an Arnold Fellowship from Brown University in 1977. He lived in Mindelo for about 6 months, working with the government on the vision for the ship’s purpose in the U.S. and ways to fund the restoration. He interviewed most of the crew of the 1975 attempted crossing. In a rolling sea, running downwind, the main boom jibed across with such force that the stays parted, and down went the mast. A very close call for the crew! And all of this happened only a few miles from port!”

Bajanga means “friend” in the local dialect. “Bajanga” was the nickname for Eugenio Das Dores Lopes, beloved by many as the caretaker of the of Ernestina when she was dockside in Mindelo after the failed 1975 transatlantic voyage. He pumped out about 300 gallons of harbor water daily to keep the ship afloat and safeguarded tools and equipment. This was no Boothbay Harbor! He lived aboard in a makeshift cabin and fished over the side or from the ship’s dories for the protein part of his cachupa. Earlier in life, Bajanga sailed in the packet trade between the Cape Verdes and West Africa, and he was a salty dog!

“Here’s the Cummins engineer (I wish I could remember his name) who was assigned to rebuild the diesel engine with help from Bajanga, me, and an assistant in the photo whose name I’ve forgotten. He was a wonderful Scotsman, totally dedicated. Day after day, improvising and toiling. We did the work with the ship floating at dock. It was a very big day when we fired up the engine and took her for a spin.  I think it was the first time she’d gone anywhere in a few years. Jaoa Brittes, the port official, came aboard for that. We were frankly worried the hull might come apart. Bajanga took the helm. I’ll never forget the elation of that moment! It seemed miraculous. No, it was miraculous, feeling her shiver back to life and roll again in the sea.” 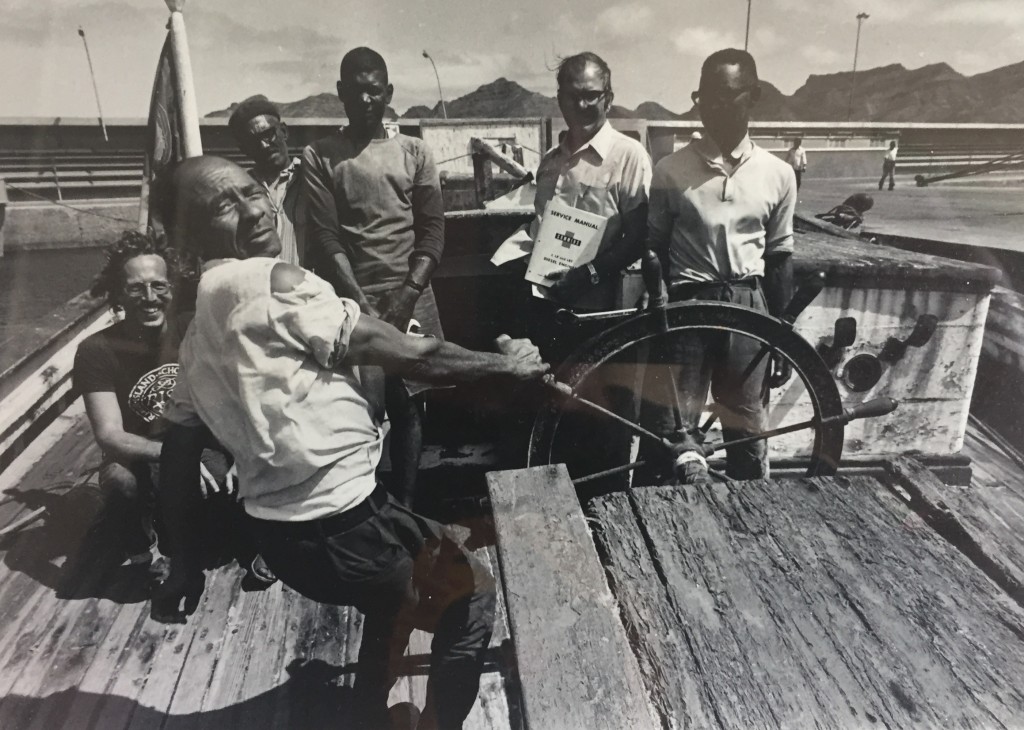 Bajanga at helm. John on the left. credit John Braman