A Perfect Evening in Charlestown

After a convivial reception, remarks were presented to the gathering by Ian Toll, recipient of the Samuel Eliot Morison Award and Julius Britto, President and Mary Anne McQuillan, Secretary. receiving the Don Turner on behalf of all the members, donors and supporters of Schooner Ernestina-Morrissey Association.  “The Don Turner Award is made annually to a person or team of people, professional or amateur, who have contributed significantly to efforts to preserve important vessels or who have made significant contributions to our knowledge and understanding of ship design and construction.”

Ian is a writer and independent naval historian who wrote “Six Frigates”, a history of the beginnings of the US Navy and is now working on the final book “Twilight of the Gods: War in the Western Pacific, 1944-1945″ of his trilogy about World War II in the Pacific. He discussed his writing process.

Mary Anne presented highlights of Ernestina-Morrissey’s history and photos chronicling the current Phase I work on the vessel.  Julius acknowledged all the individuals who have worked so hard to see  a sailing Ernestina-Morrissey.

Sandra Britto created a short video of highlights of the event.

The Commanding Officer of USS Constitution, Cmdr. Nathaniel R. Shick informed us that we needed to leave the Museum promptly at 18:40 in order to board the USS Constitution in time for Evening Colors at sunset.  We walked across the Navy Yard to the ship and boarded.  The ceremony of Evening Colors when the flag is lowered at precisely sunset is an important tradition.  We received a two minute warning and were advised the cannon would be fired at sunset.  Ian Toll received the honor of firing the cannon and SEMA’s Vice President, Bob Hildreth lowered the Stars and Stripes.

SEMA thanks The Board of Trustees of the USS Constitution Museum for recognizing the importance of Ernestina-Morrissey to the Commonwealth and the Nation. 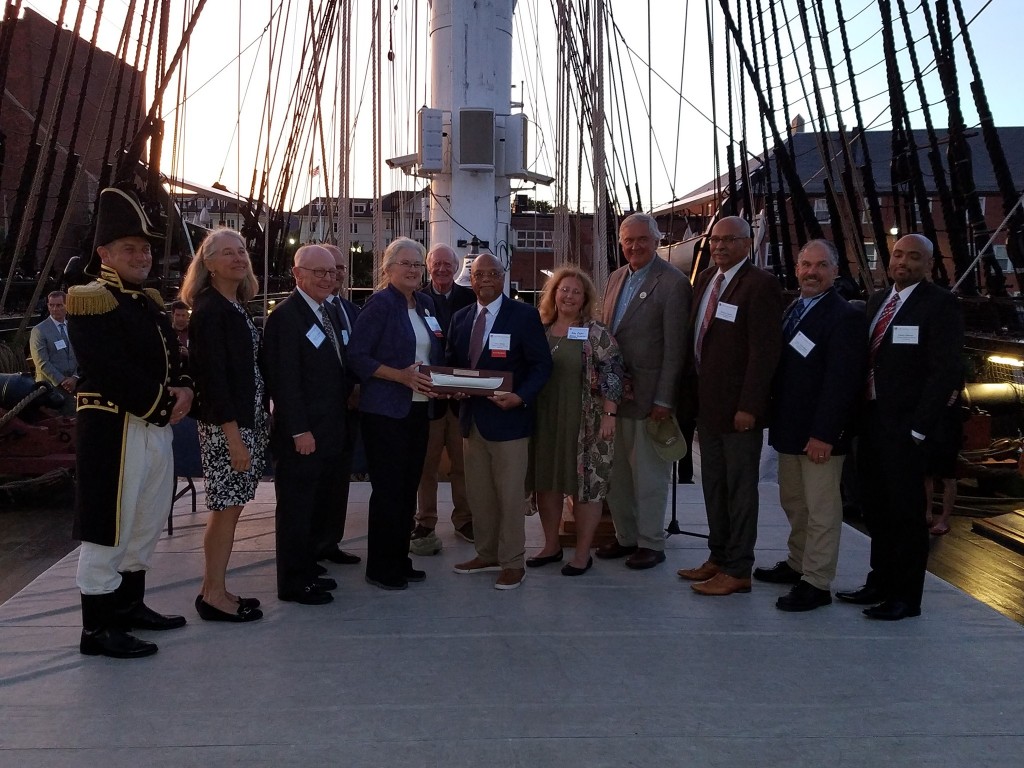 It was a perfect evening in Charlestown!

Be sure to click on the embedded hyperlinks in the text to see the videos and more information!

← An Important Step Toward Ernestina-Morrissey’s Future   |   You Can Help Today! →