Secret Missions for “The Morrissey”

In 1940 the Morrissey set a record for furthest north at 80 degrees 22 minutes North Latitude. That’s only 578 nautical miles from the North Pole! But The Morrissey was up to more than setting records in 1940 while war raged in Europe!

We have recently heard from Clem Littleton about one of the tasks his father Fred, a Bartlett Boy, was assigned on that 1940 voyage.  This is a picture of the Morrissey Fred took after 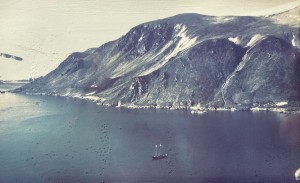 You can see how high Fred climbed when you make out The Morrissey at anchor in the bay.

Bartlett told Fred and another boy to climb up to a high point overlooking this harbor on the Greenland coast to take some bearings and azimuths with surveying equipment. Years later Clem found out it was because Bartlett was working secretly for US military intelligence and they were scouting air base and radar station locations all around the Arctic, particularly Greenland and  Iceland. In fact Bartlett and the Morrissey served through the war. Clem reports he believes Bartlett and The Morrissey surveyed what became Keflavik AFB outside Reykjavik, Iceland,
The following year the Morrissey was chartered by Louise Boyd for another secret mission, You can read an introduction that account as you scroll down to read about the 1940 voyage. HERE

This entry was posted in Historical Resources. Bookmark the permalink.