The Board of Trustees of the USS Constitution Museum has selected Schooner Ernestina-Morrissey Association to receive the 2019 Don Turner Award.  This award recognizes a person or team of people who have contributed significantly to efforts to preserve important vessels. We will proudly accept this award on behalf of all SEMA members, donors and supporters who have helped us give voice to our conviction that in order to honor her past and serve the Commonwealth in the future, Ernestina-Morrissey must be SAILING! 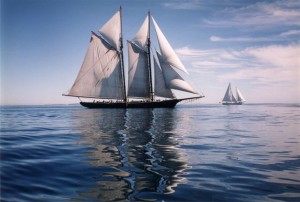 “The Schooner Ernestina-Morrissey Association has demonstrated its dedication to preserve, protect, and restore this ship.  While pursuing the fundraising needed for the restoration, the Association continued to contribute to public education about the ship’s history, documentation about her restoration, volunteer maintenance, and consistent advocacy for her rich archives of historic records and objects.”

We are all honored to be in the company of the amazing people and organizations that have received past Don Turner Awards!  And we thank The Board of Trustees of the USS Constitution Museum for recognizing the importance of Ernestina-Morrissey to the Commonwealth and the Nation.

Tickets are available for anyone who wishes to attend the ceremony on the USS Constitution on September 12.