It was a perfect day of sailing on an Essex-built schooner in Gloucester.

Schooner Adventure hosted a group of Ernestina-Morrissey supporters who enjoyed a fantastic sunset sail with the very best conditions. They included representatives of several of the vessel’s lives: Clayton Morrissey, grandson of Effie M. Morrissey‘s 1895 captain, joined us with his daughter and her husband. Laura Pires-Hester and Julius Britto who worked on the repatriation from Cape Verde from the late 1970′s until 1982 when the vessel, then Ernestina, was presented as a gift from Cape Verde, received by the state of Massachusetts.  Laura joined the Schooner Ernestina Commission in 2007 and served as chair for several years while the plans for the vessel’s  future were being made. Julius is currently the President of SEMA. Members of the Education years’ (post 1982) crew were aboard too, and DCR staff that have worked hard to return the now Ernestina-Morrissey to sailing and serving the Commonwealth. And Ernestina-Morrissey‘s future was represented by her current captain, Tiffany Krihwan.

Thank you to Polly Zajac for the terrific organizing of everything! the sail, the catering and sign-up.

And thank you to Captain Wheeler and the great crew of the Schooner Adventure!

As they say a picture is worth 1,000 words so enjoy these: 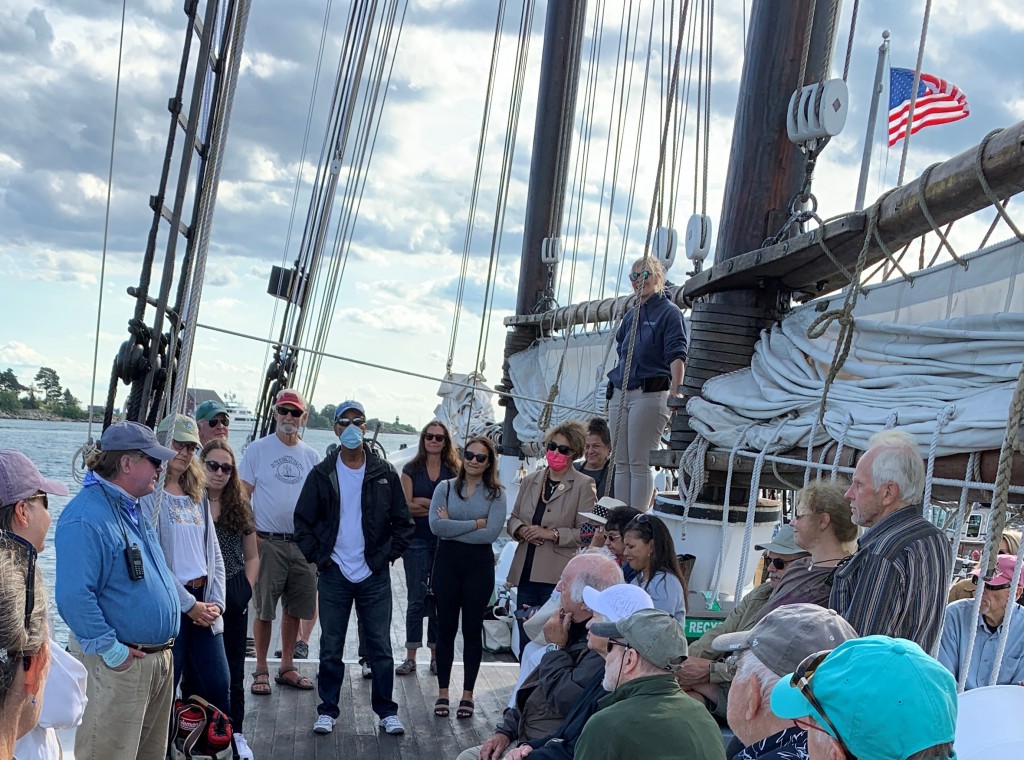 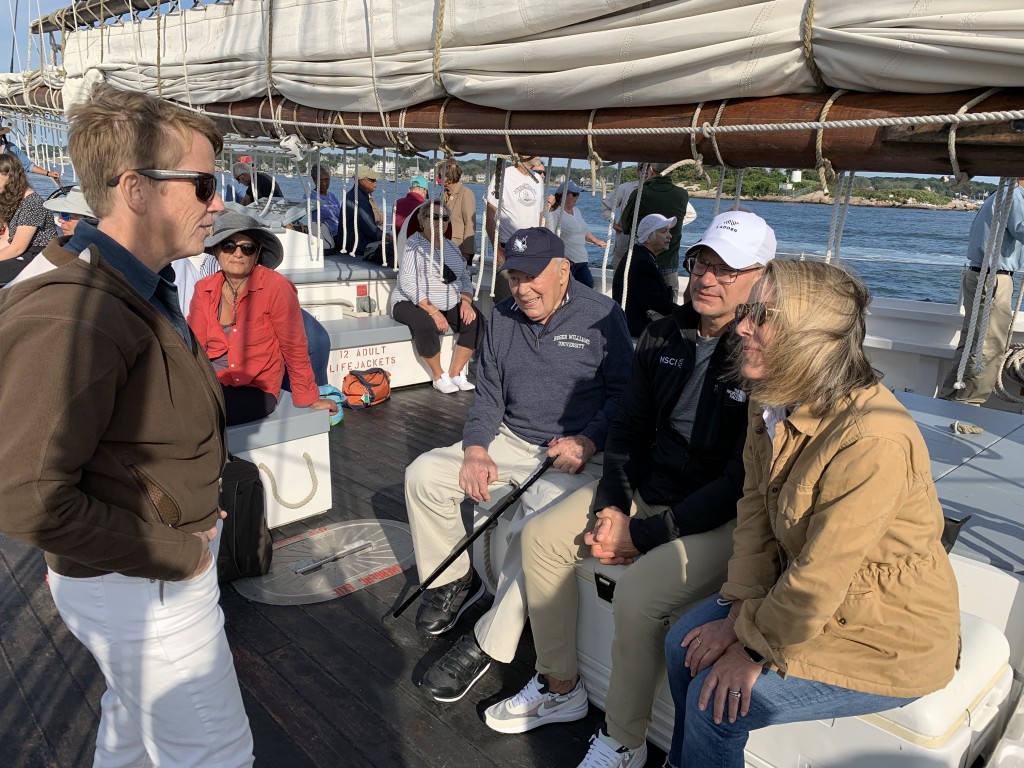 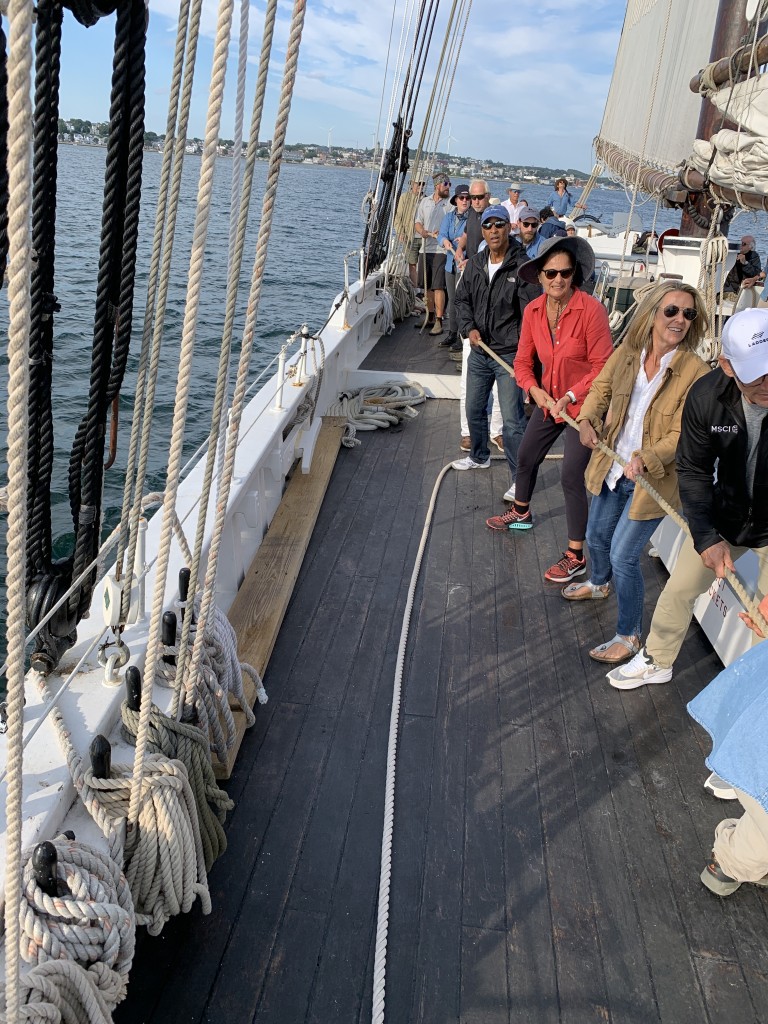 Ready to raise the peak of the foresail 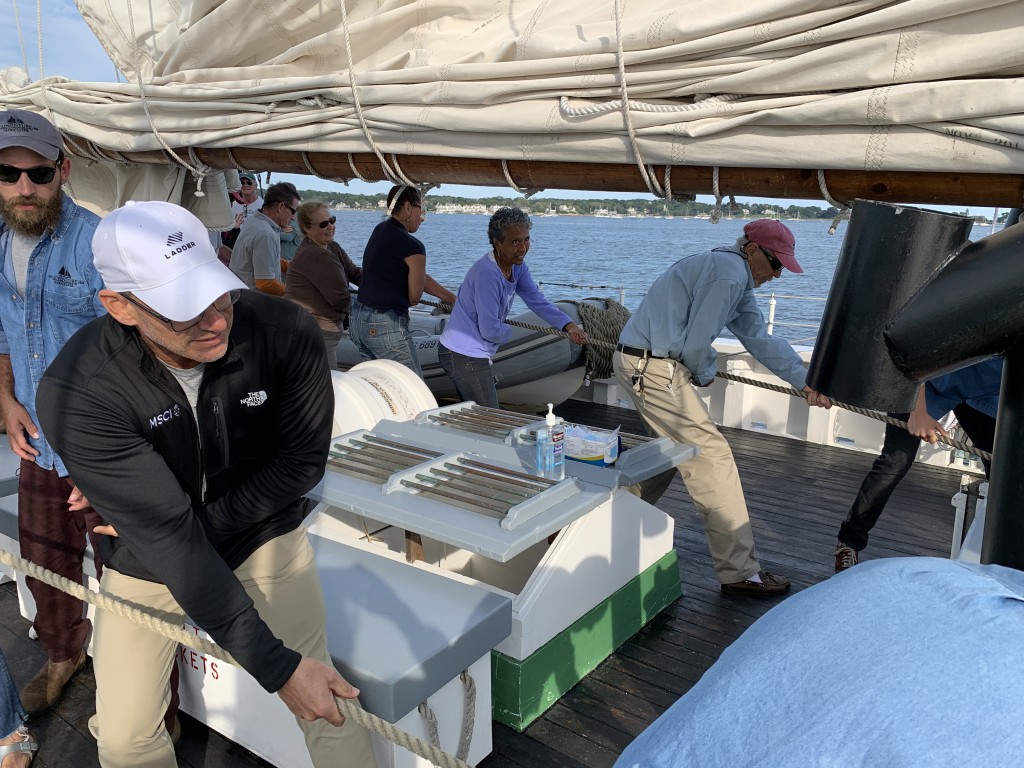 Working together, hauling up the foresail 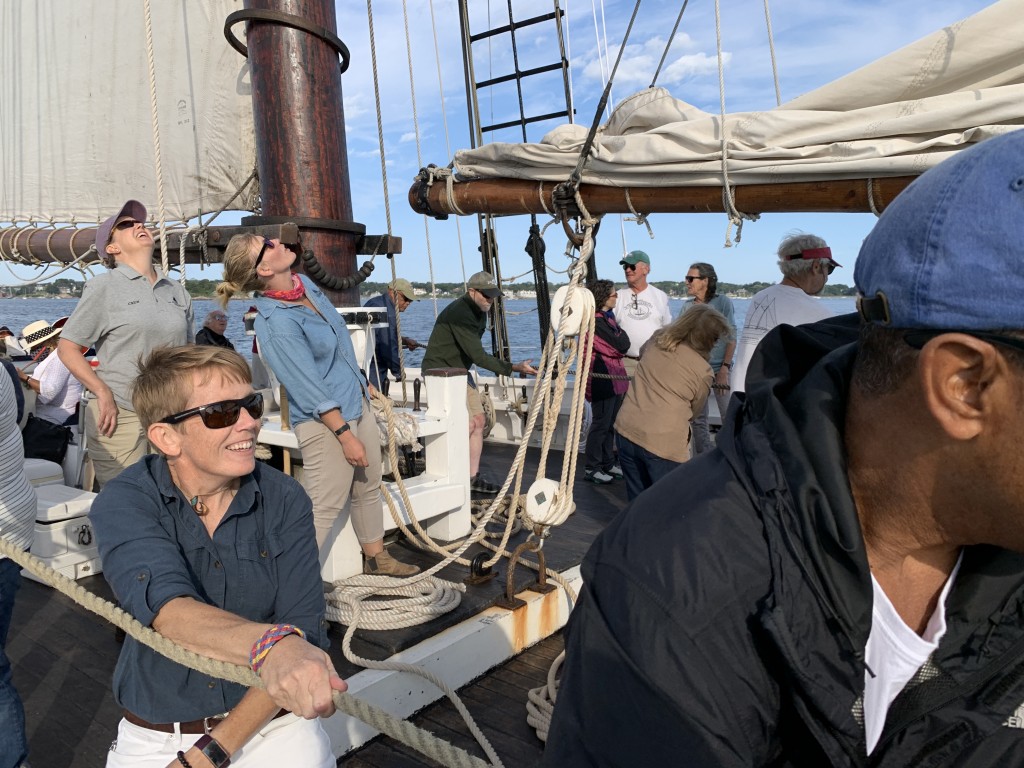 As the crew hauls the lines, the mate makes sure all is well aloft with the gaff and lines.. 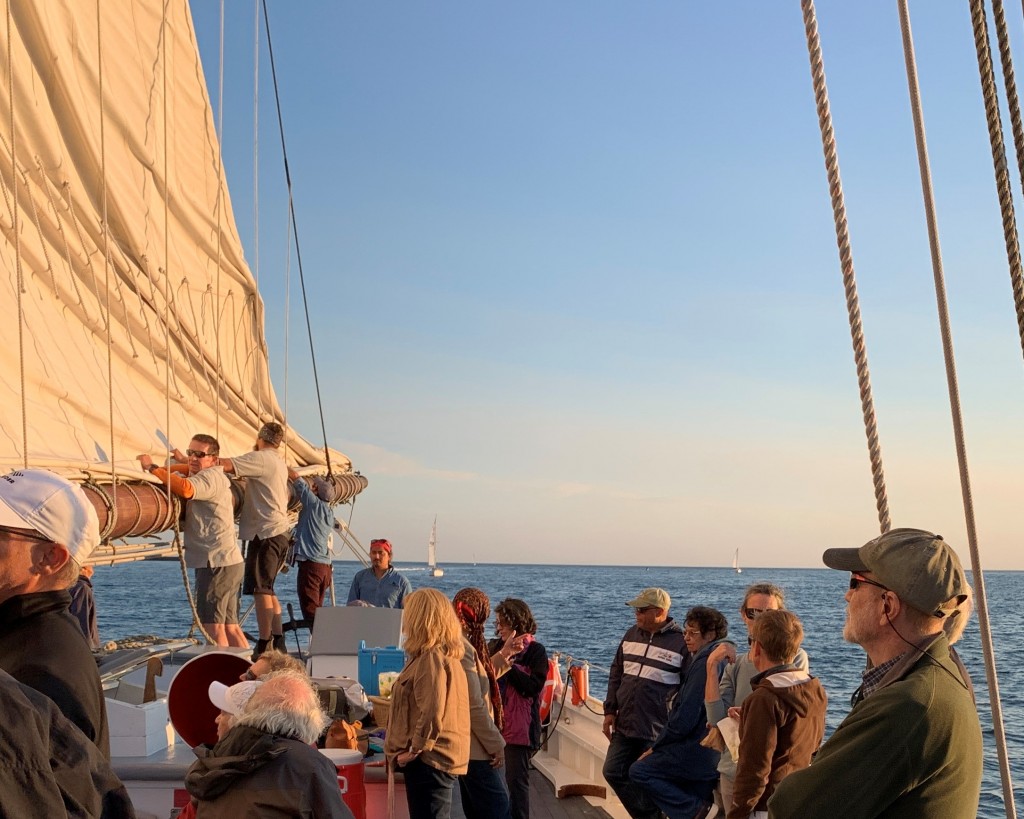 Furling the main in the glow of the setting sun. 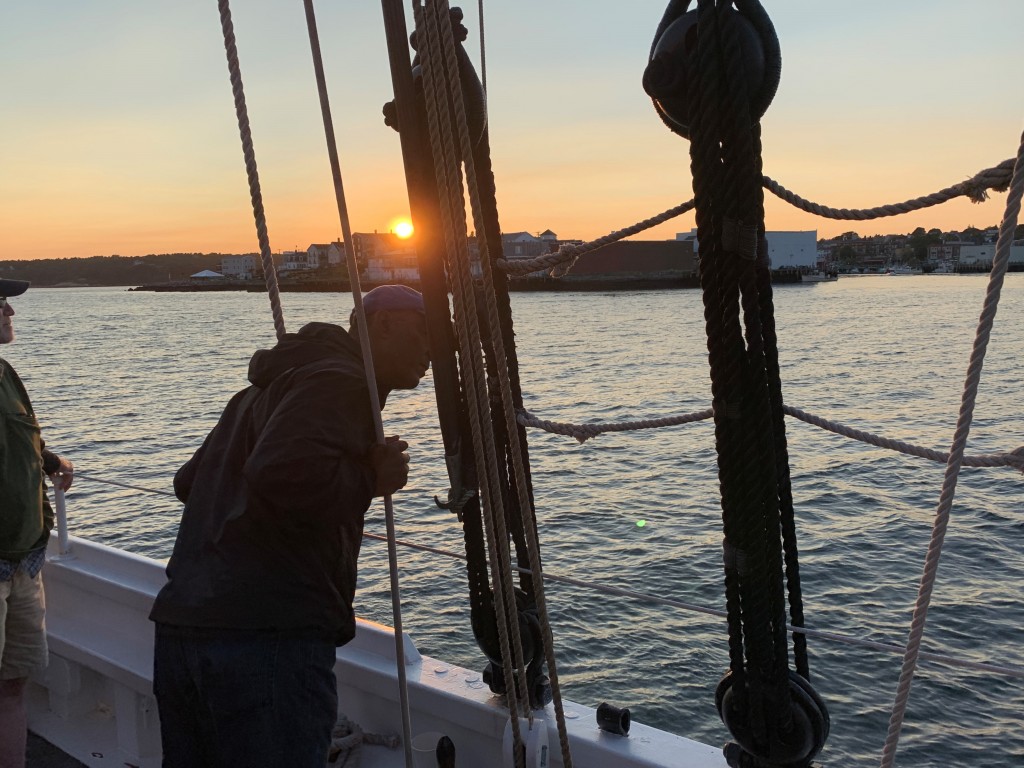 Sunset over Fort Point, Gloucester. A perfect end to a wonderful sail! 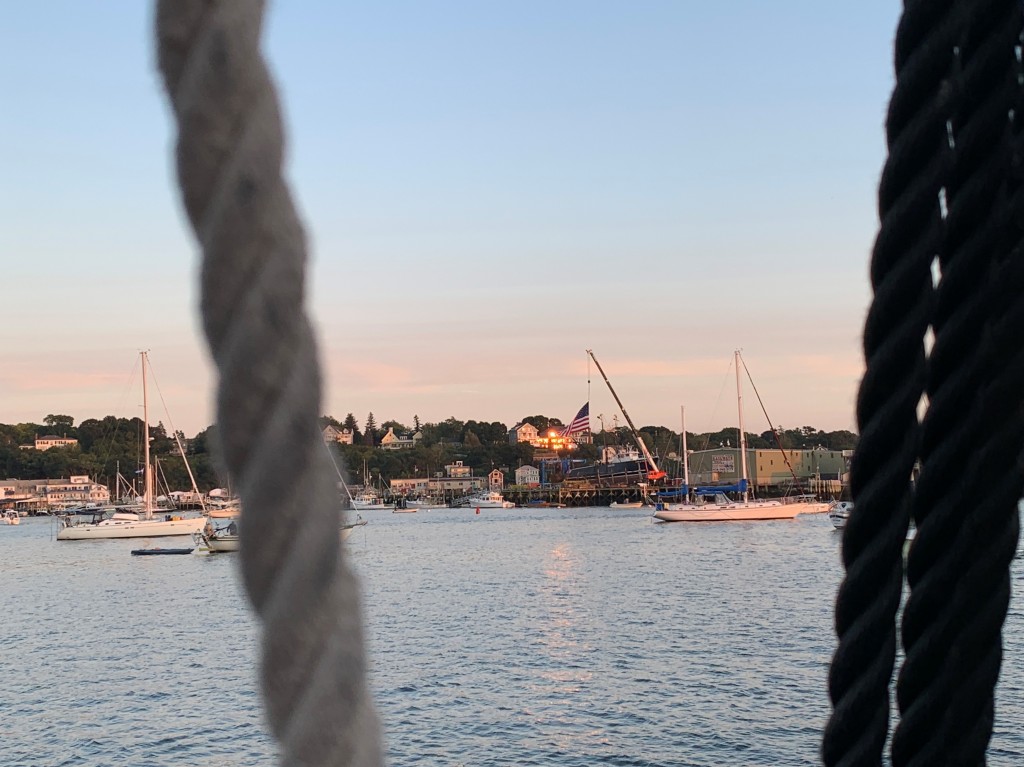 The 20th anniversary of 9/11 was on our minds too. Gloucester Marine Railways on Rocky Neck recognized the day by displaying the Flag with their crane. Adventure was being restored in 2001 and Ernestina was completing a transit from Norwalk CT and was dockside in New Bedford.

All the photos can be found in SEMA’s Flickr

If you are not already getting our email Newsletter you can sign up in the right-hand column.

The Newsletter is the best way to keep up with Ernestina-Morrissey‘s progress as she gets ready for launch next year.

← Progress in the Shipyard~ September 7, 2021   |   Ernestina-Morrissey’s Return to Massachusetts →