We are very sad to pass along the news that H.F.”Gerry” Lenfest, a great benefactor of the Ernestina-Morrissey, passed away on August 5th. A naval officer, lawyer, entrepreneur, and philanthropist, Gerry at age 12 in 1942 was supposed to sail on the Effie M. Morrissey as a “Bartlett Boy”, but the war intervened and the vessel was transferred to government service.

Gerry never forgot his dream of sailing on the Morrissey 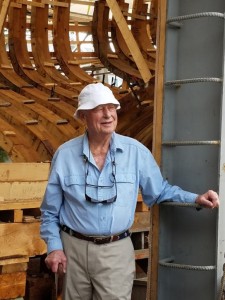 and followed the schooner’s story through the years. In 2014 he donated $1.8 million dollars to the current $6.3 million-dollar rehabilitation underway in Maine, a significant catalyst to securing the additional private and state funds the project requires. He actively followed the project’s progress and he and his wife Marguerite visited the shipyard in 2016 and saw first-hand what their support was helping to accomplish.

We regret he will not be able to see and enjoy the beautiful strong renewed vessel be launched, but are pleased he was able to see how far Ernestina-Morrissey has come and know what a difference his support and leadership had made.

Thank you, Gerry, and fair winds from SEMA and the schooner you loved.

← Why Ernestina-Morrissey Is Important   |   Thank You, New Bedford →