Celebrating with Good News for Ernestina.

Ernestina‘s supporters filled M&C Cafe yesterday to celebrate the launch 117 years ago, in Essex, Massachusetts, of Effie M.Morrissey, the schooner that became Ernestina when renamed by Captain Henrique Mendes in 1948. 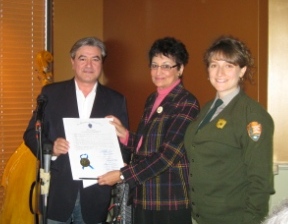 Chef Mike Melo prepared an outstanding buffet enjoyed by all with many promising a return visit to the M&C Cafe. 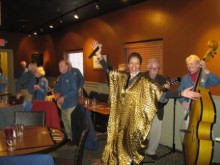 who had everyone dancing in the aisles, was organized by SEMA director Polly Zajac.  Here Candida is accompanied by Tom Goux and Polly Gardner. 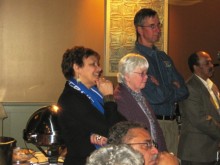 The fundraising celebration was organized by Barbara Burgo, longtime Ernestina volunteer.  The event and silent auction raised nearly $4000 to support efforts to get Ernestina sailing again!

← Distinctive Destination   |   Digital Initiative for you and Ernestina →