Julius Britto was in Praia, Cape Verde.  Julius will take you to there to re-live the

excitement of the first Independence Celebration of Cape Verde.  You will be fascinated as he recounts his life-changing experiences leading up to and after that eventful day in Cape Verdean history.

You will hear how this experience became the driving force in his support for the preservation of the Ernestina-Morrissey.  Julius was appointed to the first Massachusetts Ernestina Commission in 1977 by Governor Michael Dukakis.  He is currently President of Schooner Ernestina-Morrissey Association, Inc. and is working with the Ernestina 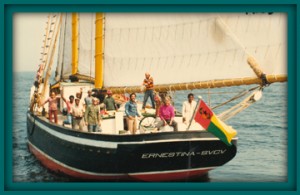 Commission to assure a bright, SAILING future for the Ernestina-Morrissey.

This presentation for the 43rd Cape Verdean Recognition Week is sponsored by the Schooner Ernestina Commission, the Schooner Ernestina-Morrissey Association, Inc. and the New Bedford Whaling Museum.  During the 6:00 pm reception you can enjoy the Museum’s Yankee Baleeiros! Travelling Exhibit which will be displayed in the Jacob’s Gallery.

Julius and his wife Sandra are the owners of Attentive Home Care, Inc. located in Marion, Ma.

← A New History of Ernestina-Morrissey   |   Order Phoenix of the Seas →