Phoenix of the Seas, by Chester Brigham

Please join us at the Cape Ann Museum, Saturday June 13 at 3:00 with a presentation by the author 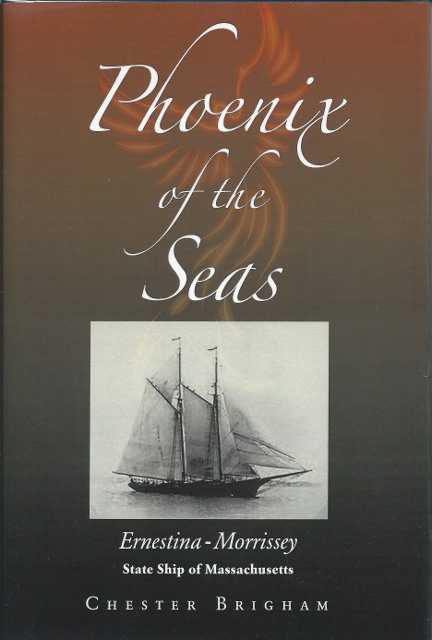 The Ernestina-Morrissey’s story is one of wide-ranging maritime adventures, lived by a remarkable cast of captains, crews and voyagers. Sailing to the Grand Banks from Gloucester for cod in the 1890s … voyaging to the Arctic every year for almost two decades on scientific expeditions … serving under both the U.S. Army and Navy in the Arctic during World War II … crossing the Atlantic a dozen times as a packet ship, linking Cape Verdean-Americans in New England with family members on their home islands … back in America under sail out of New Bedford, educating boatloads of school children on the wonders of their ocean environment.

In Phoenix of the Seas, Chester Brigham writes of the indomitable spirit of the Ernestina-Morrissey. Of the men and women who have commanded her: Gloucester fishing captains Bill and Clayton Morrissey, Arctic navigator Bob Bartlett, Henrique Mendes on Cape Verde, round-the-world captain Dan Moreland. Of the lives the vessel has touched: dory-trawling fishermen on the Grand Banks, hardy field scientists, Inuit hunters, GIs at remote weather stations, Atlantic islanders, volunteers who have sacrificed much for love of the ship.

She has been written off as doomed time and again. But now, this Phoenix ship will rise from the ashes once again! Thanks to a combination of private and state funding, the Ernestina-Morrissey is to be completely restored – after which, based at the Massachusetts Maritime Academy, she will set sail in her next, yet-to-be-decided incarnation.

← Where in the World has Ernestina-Morrissey been?   |   Progress in Boothbay →