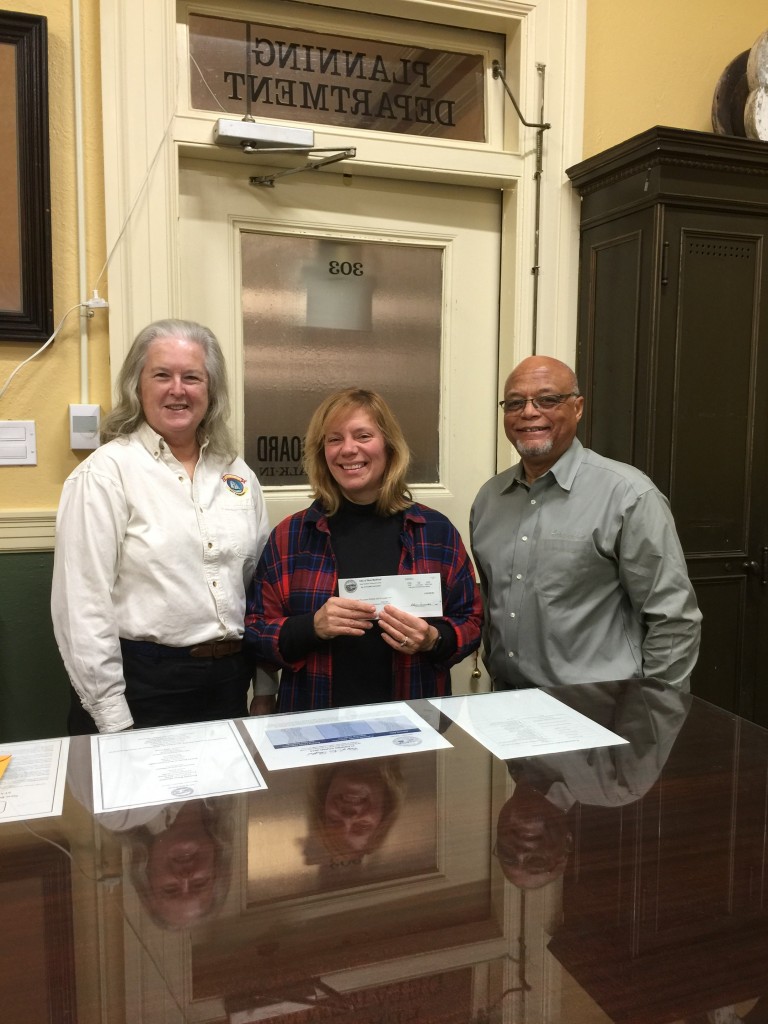 On the last Friday of 2018, Julius and Mary Anne met Anne Louro, the Preservation Planner in the offices of the New Bedford Department of Planning, Housing and Community Development, to receive a $100,000 grant from the City’s Community Preservation (CPA) funds .   ”CPA is a smart growth tool that helps communities preserve open space and historic sites, create affordable housing, and develop outdoor recreational facilities. CPA also helps strengthen the local economy by expanding housing opportunities and construction jobs, and by supporting the tourism industry through the preservation of a community’s historic and natural resources.”

New Bedford’s $100,000 contribution to the current rehabilitation of Ernestina-Morrissey will be matched 1:1 by The Manton Foundation, bringing SEMA very close to completing our $1 million pledge toward the rehabilitation project.  In addition to The Manton Foundation, SEMA’s campaign has been supported by the Mary Morley Crapo Hyde Eccles Fund (of CFSEMA), The Carney Family Charitable Foundation, Hildreth Stewart Charitable Foundation, The Island Foundation and by thousands of individual donations from those committed to SEMA’s mission to see the historic Schooner Ernestina-Morrissey working as a cultural and educational vessel for the benefit of the public again.

It’s not too late to join them and send a gift to SEMA’s 2018 Annual Appeal!

As we said in our grant application: “New Bedford needs a certified, sailing Ernestina-Morrissey to return. She is a proven platform for excellence in education and a striking focal point on the New Bedford waterfront, masts rising to the sky. She is a matter of pride for Cape Verdean Americans, a touchstone to the past for the shipbuilding and fishing industry, an example for scientists and explorers who look to her Arctic history for inspiration and a happy memory for the thousands of excited students and citizens who experienced home port New Bedford as a route to Buzzards Bay and beyond. In addition to preserving this irreplaceable icon of Massachusetts’ maritime history, and providing exemplary educational programming, this project will provide recreational opportunities for residents to experience New Bedford’s maritime character by sailing out on the water surrounding this City whose history is tied so closely to the sea. Throughout the year Ernestina-Morrissey will be flying the New Bedford flag as the she sails to ports in Massachusetts and beyond.  As an irreplaceable example of the best of our maritime history: Fishing, Exploration, Immigration, Education and Service to our Nation, she is New Bedford at its best!”