During the Boothbay Harbor Windjammer days in June the crew presentated a demonstration of the planking process for the public. After you check out the video take a look at the photos below for further explanation.

The planking started in late winter as you can see in this post from late March. 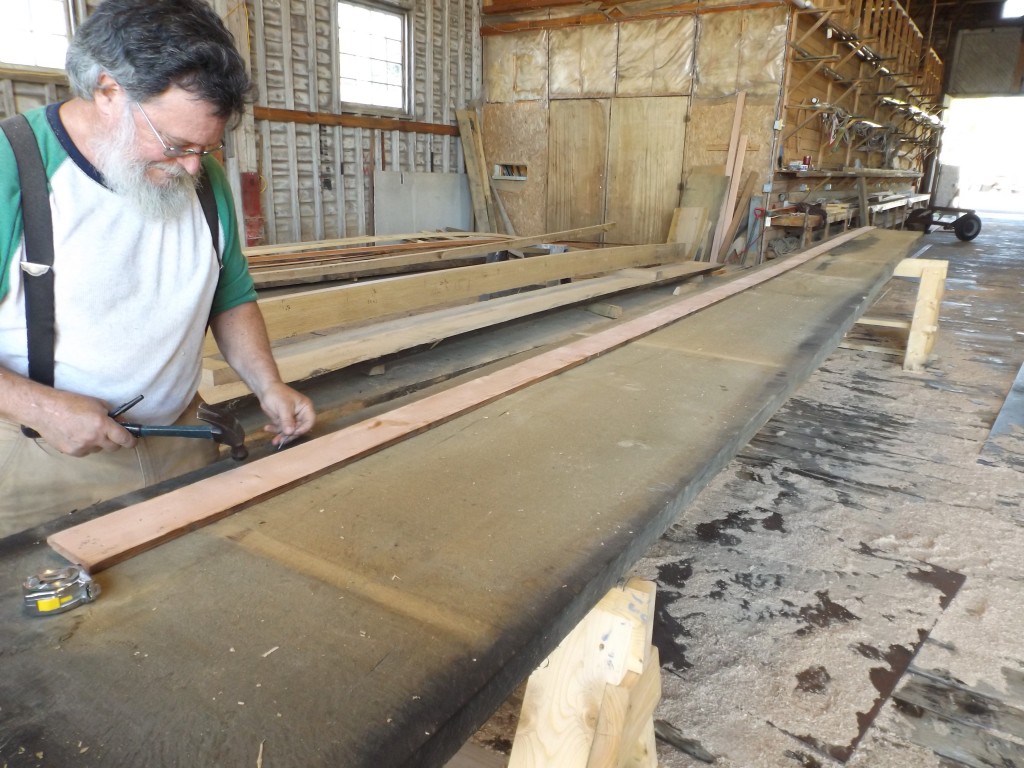 The 3 inch thick oak plank is marked and cut. Here David Short, project manager,uses a spiling batten to mark the curve needed for this plank. 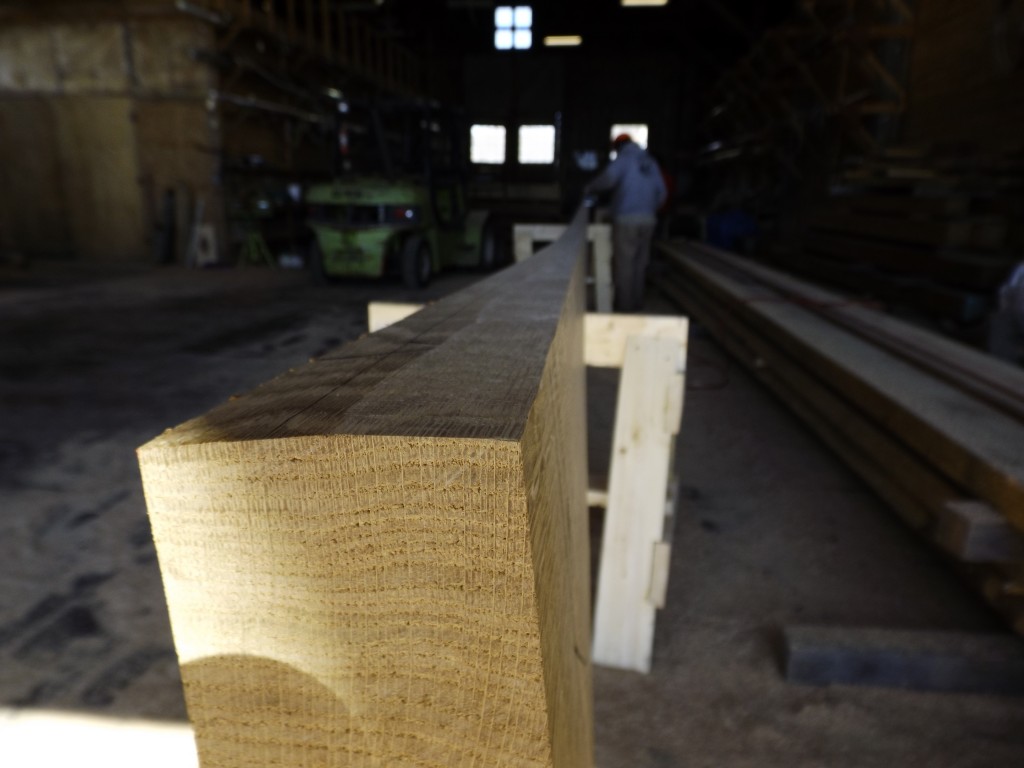 Once the plank is shaped and planed, shaping a caulking bevel is the last preperation before heading to the steam box. David Short, master shipwright, uses a planer to bring the bevel to the pencil line. The bevel will allow space for the oakum and cotton caulking.

The process creates a lot of wood chips! 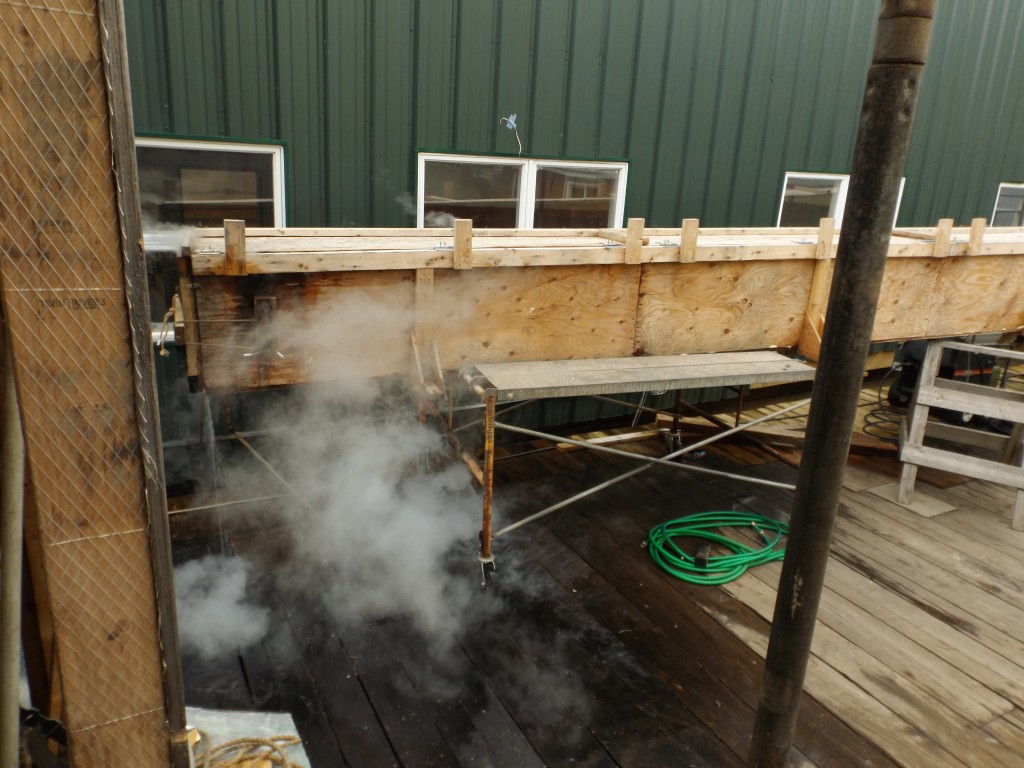 Time in the steam box makes the plank hot and wet and easier to bend into place on the frame. The 3 inch thick planks are steamed for 3 hours, 1 hour per inch.

Here’s a video of the crew loading a plank into the steam box.  Meanwhile the frames are being prepared.

The seams between the futtocks of the double sawn frames are caulked where the watertight bulkheads will be positioned. 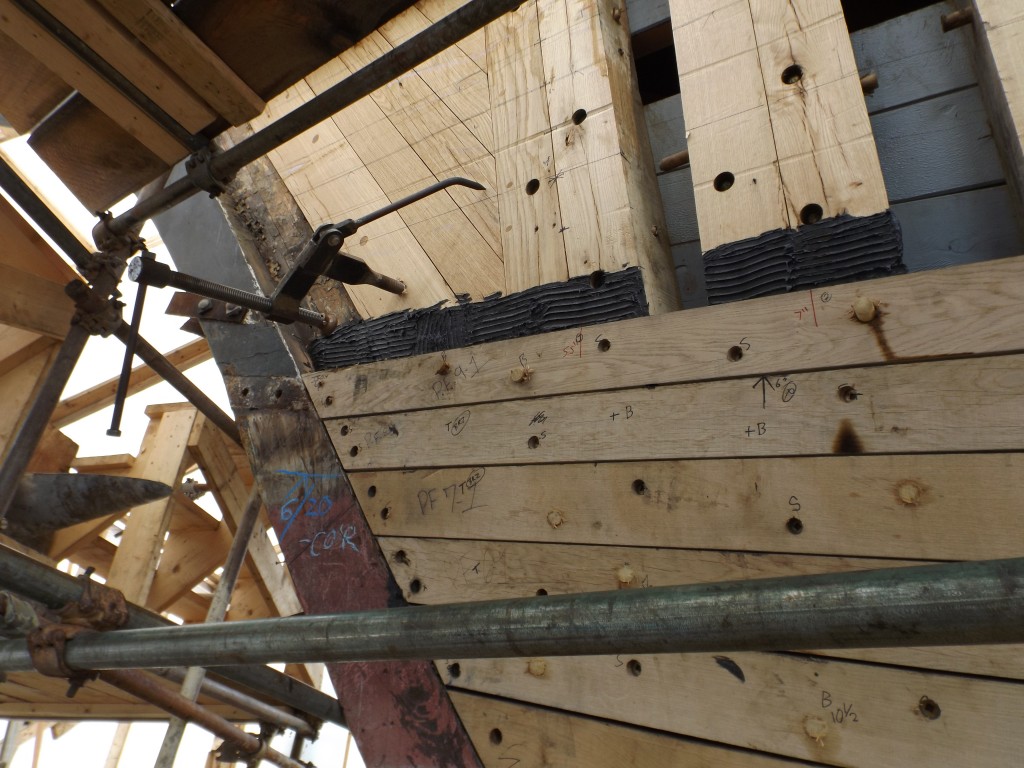 The ceiling clamp is positioned, ready to hold the plank in place. 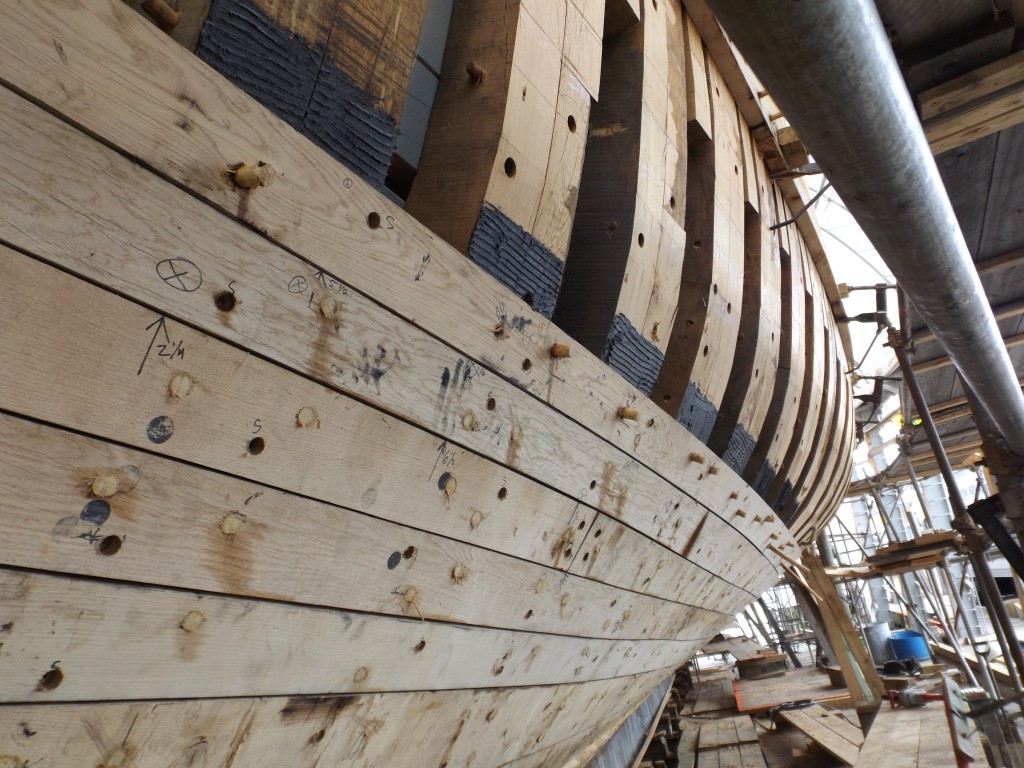 Bedding for the plank is applied to the frames. 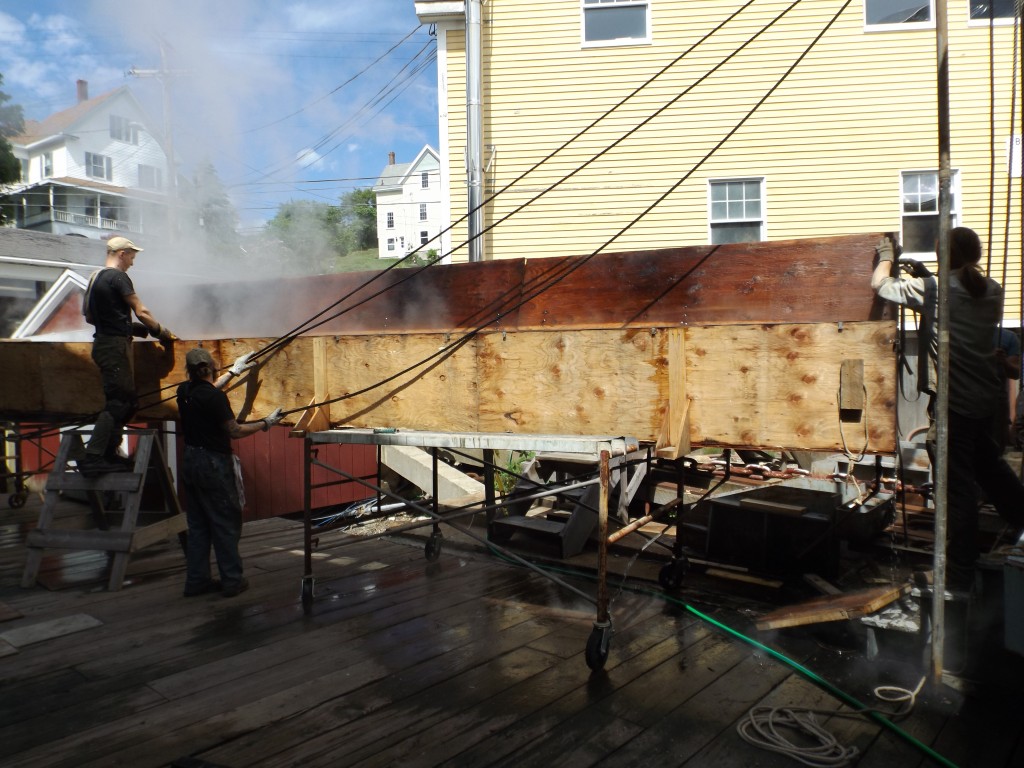 Preparing to hoist the plank from the steam box. 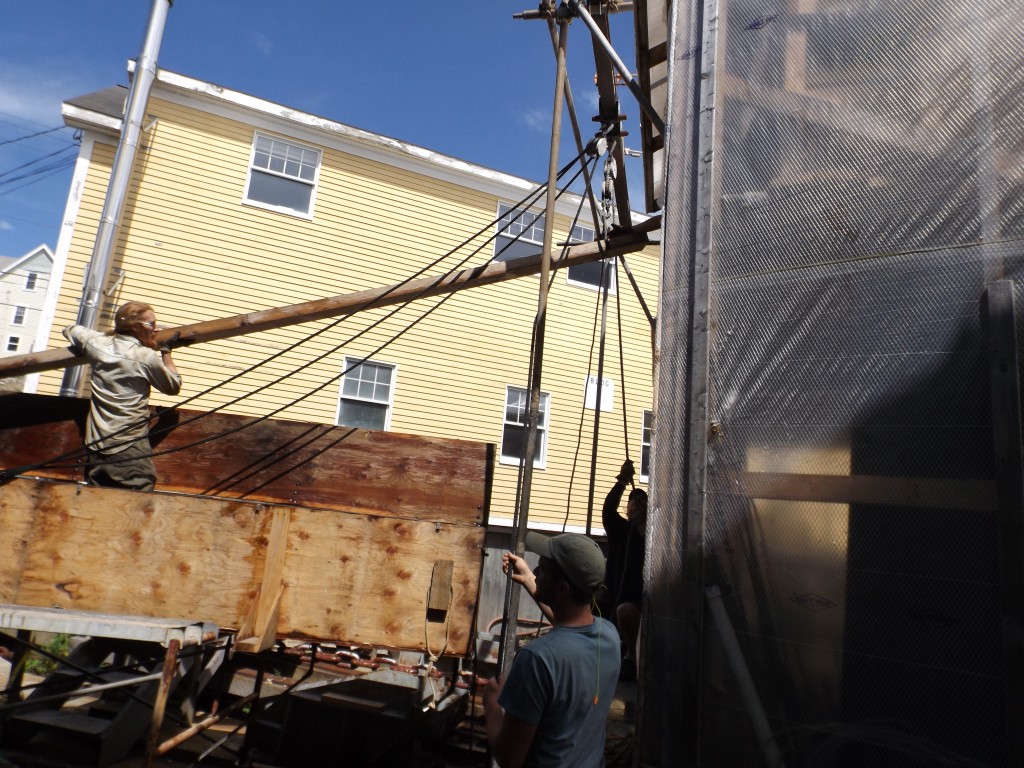 The plank has to be raised above the staging inside the shed.

Here’s a video of part of the hoisting process. The photos below are a different plank than shown above in order to show the sequence of the process. 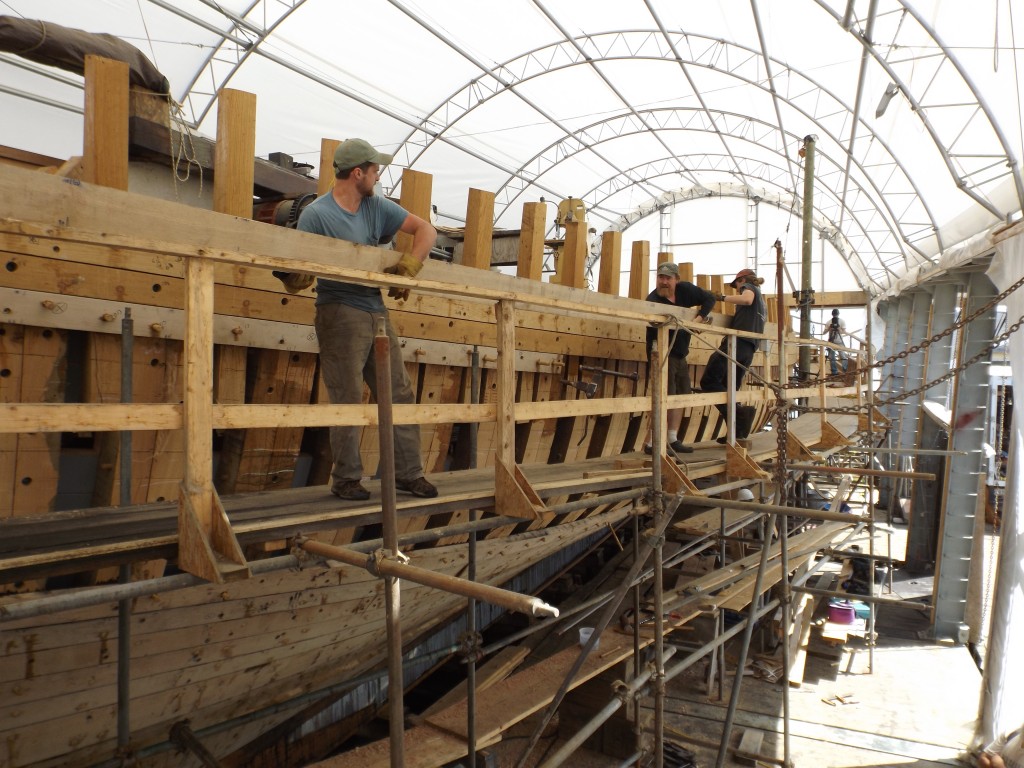 The crew carries the hot plank into position. (note the gloves) This new plank will be mid-ships. 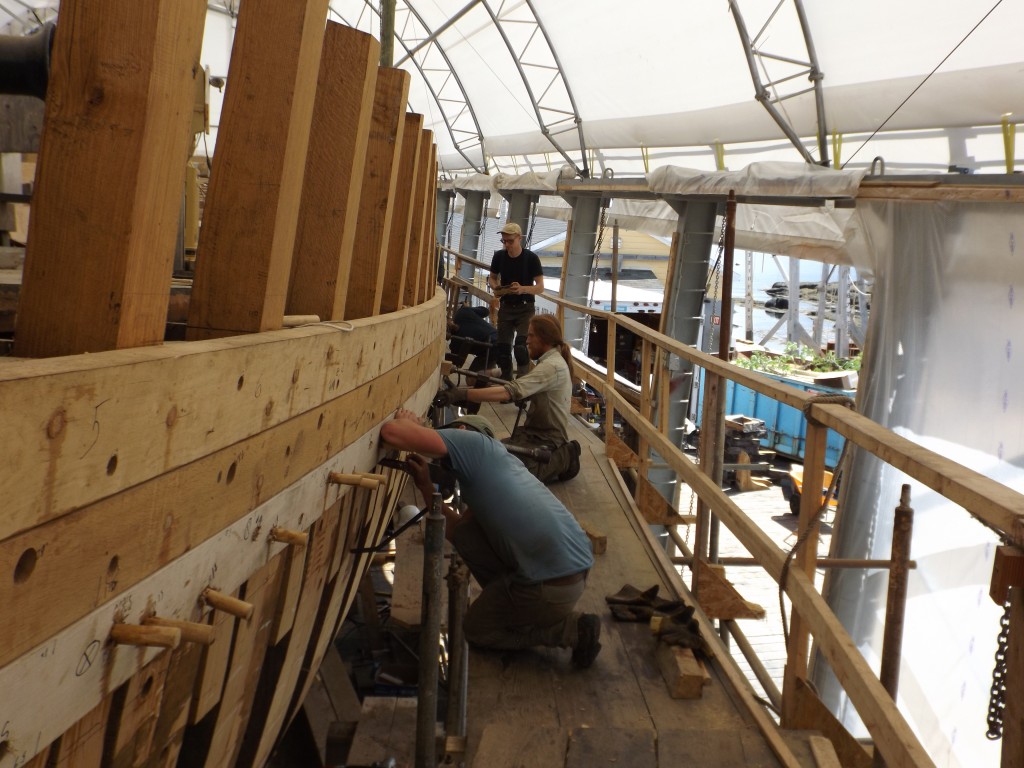 The new plank is clamped into place next to the the previously fastened plank of that strake. The trunnels have not been trimmed from that plank yet 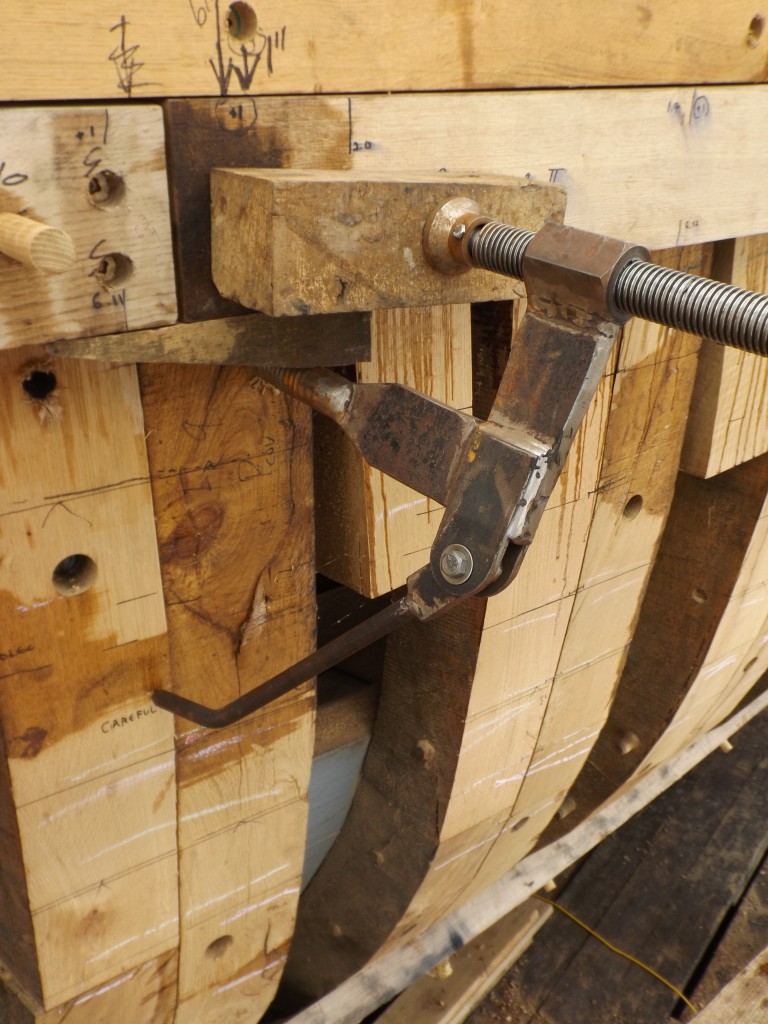 This specialized tool is called a ceiling clamp. It can tightly clamp the plank to the frame and to the butt of the adjoining plank, until the trunnnels and other fastenings can attach the plank to the frame. Notice in the video at the beginning of this post, one of the crew is using the light from an Iphone to make sure the joint between the plank and the stem is tight. 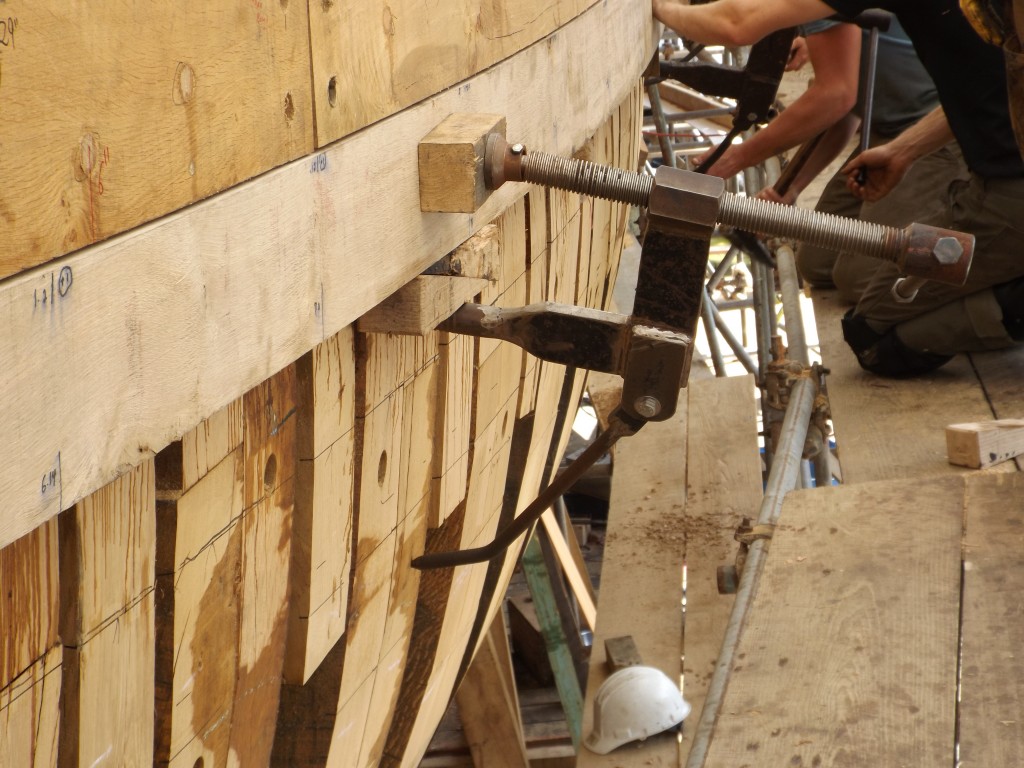 Wedges are used to force the plank tight against the plank above. 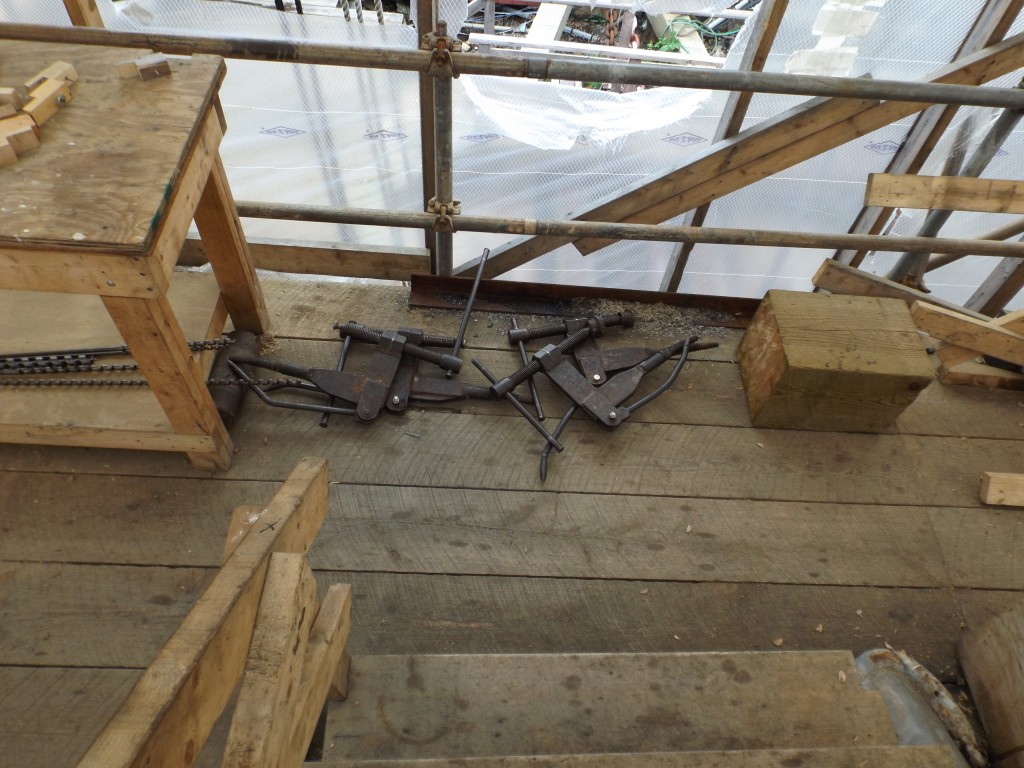 The ceiling clamps were fabricated in the shipyard machine shop. 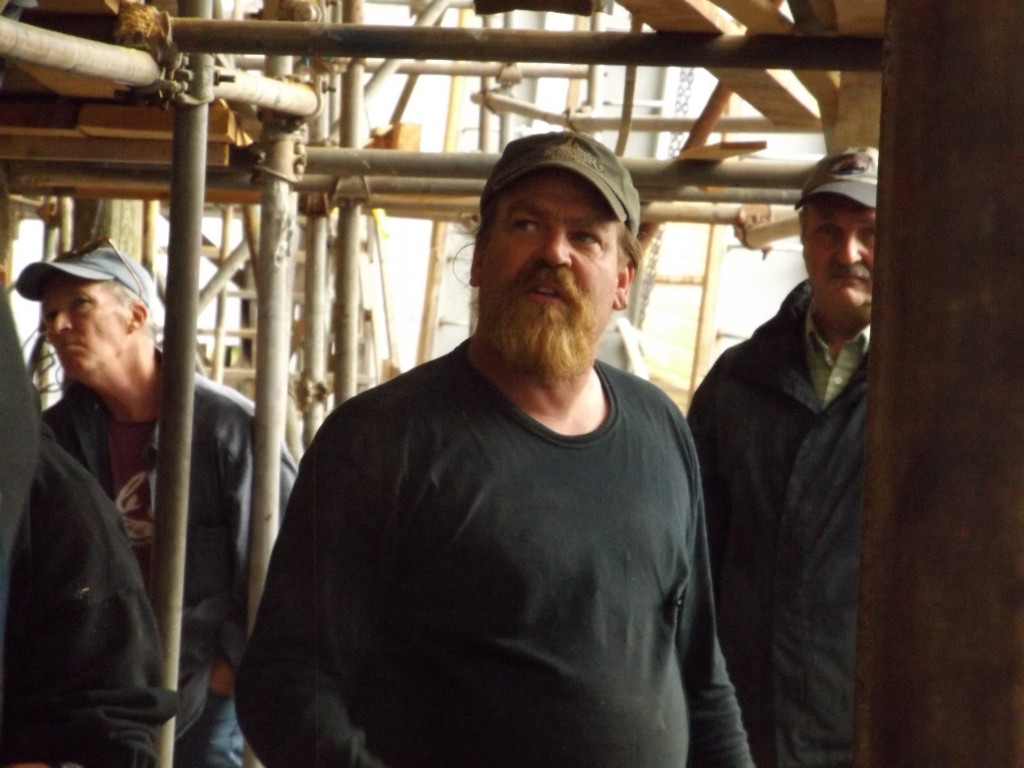 Shipwright, Ross Branch explained the process to the crowd at the Open House.

Here’s the link again if you would like to see the video again. 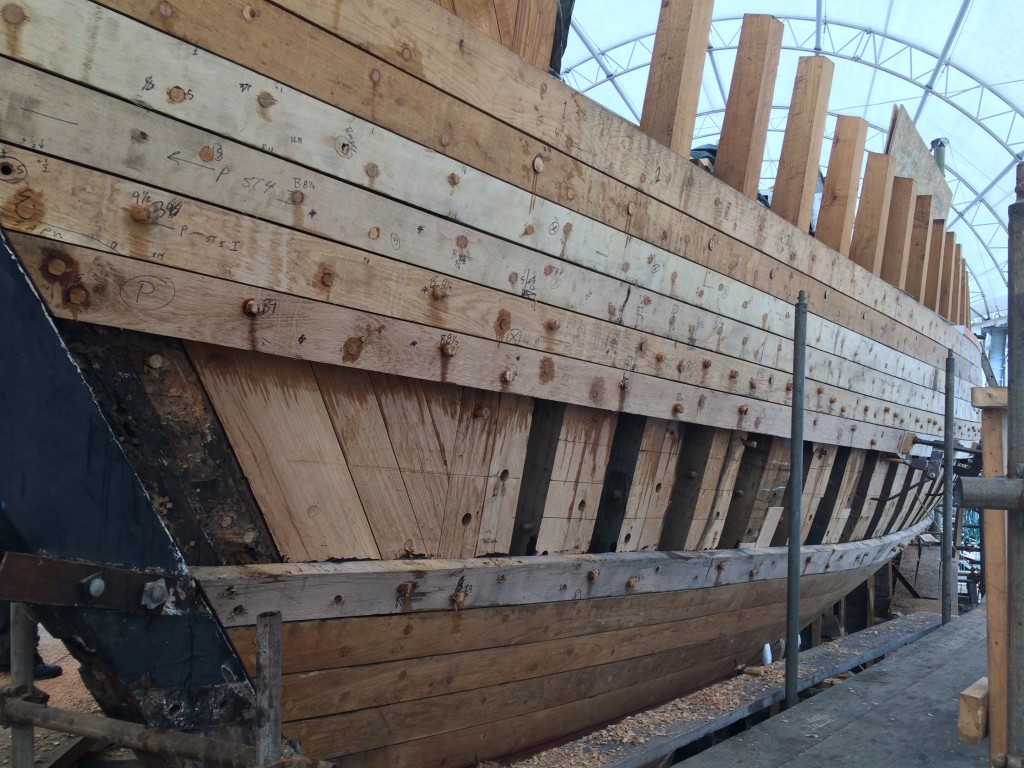 This photo taken by Laura Orleans on September 12 shows the progress since the shots shown above which were taken in late June. 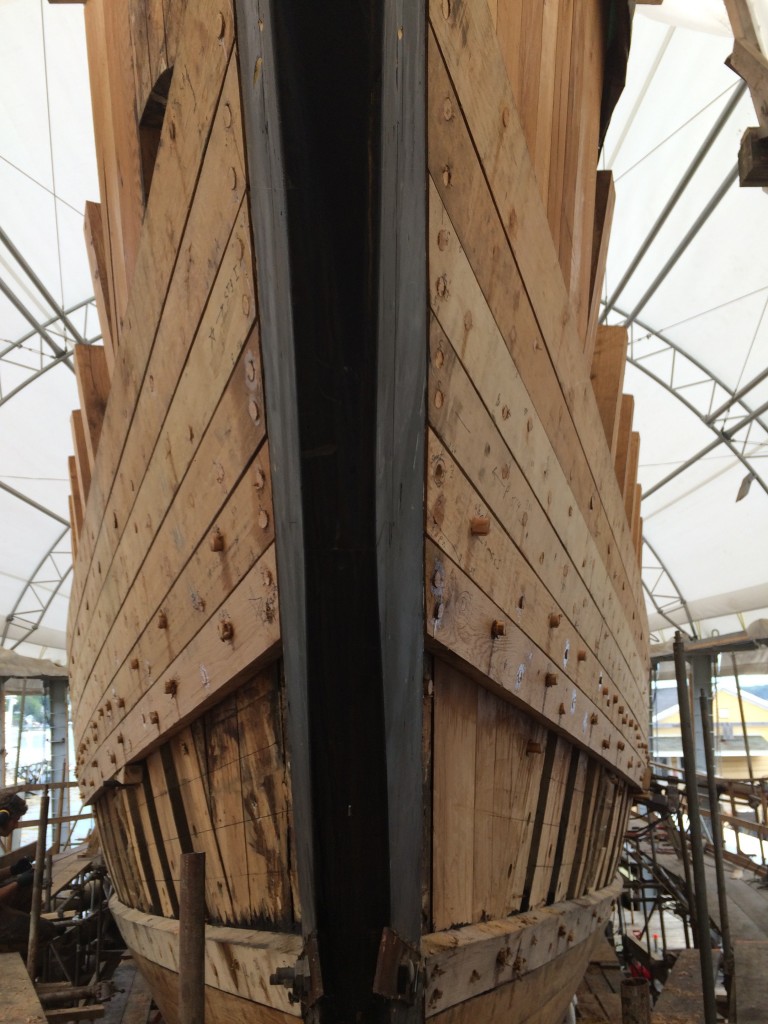