On Friday, July 27 Ernestina‘s new foremast was delivered to New Bedford State Pier.  The mast was purchased by SEMA  and donated to the Ernestina Commission.  The mast donation was matched by DCR’s Partnership Matching Funds Program.

The mast is made from a Douglas fir and brought by truck from The Spar Shop at the Historic Seaport in Washington State. The timber was originally 85 feet long and four and a half feet across. After trimming and turning, the length was reduced to 84 feet and the mast now weighs in at over five tons.

Over the next few months, Department of Conservation and Recreation contractors will prepare the mast to be lifted onto the Schooner and fitted into place.

Ernestina friends and volunteers were on hand to welcome this step toward returning Ernestina to serving the Commonwealth as she has in the past. 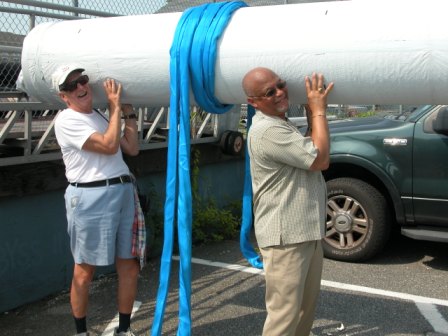 “This was a good day for Ernestina. We are seeing a lot of positive things happening, and I feel very excited about what we can accomplish now,” said Julius Britto, President of SEMA.

Former New Bedford Mayor Scott Lang was there for the mast arrival, and showed his support for her restoration, “About six years ago, I said, ‘how goes the Ernestina goes New Bedford,’ so you’ve got me for life now because I made a commitment that this vessel is going to show the re-birth of the city.” 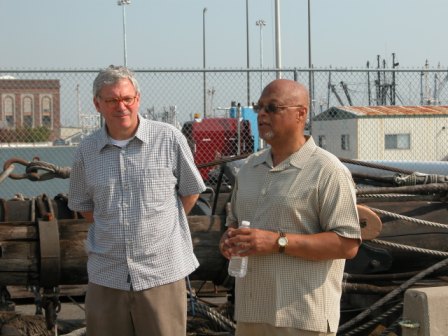 “We have some very generous angels right now who are putting their foot forward and saying ‘this is history we are not going to lose.’ I am very optimistic. I feel better about [Ernestina’s future] than I ever have before,” said Lang. 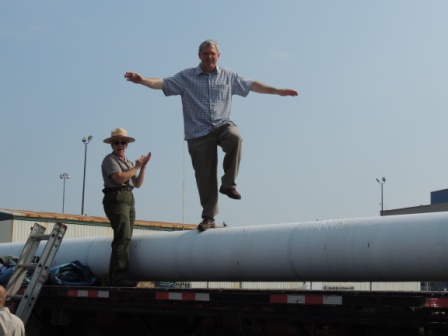 Consider a donation to SEMA as we work to insure Ernestina will sail again.