The records of the Schooner Ernestina Commission have recently been preserved in the archives of the Massachusetts Department of Conservation and Recreation (DCR).  DCR Archivist Sean Fisher shared with us a copy of the Deed of Gift which you can download and view.

In 1982, after 88 years of fishing and exploring as Effie M. Morrissey and packeting as Ernestina,  the ship belonged to the Republic of Cape Verde.

The Cape Verdean government presented the ship, as a gift, to the People of the United 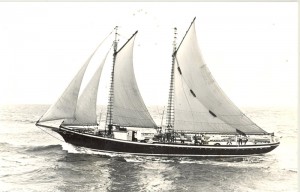 Sailing off Newport RI in August of 1982

States.  This would not have been accomplished without the efforts of many people around the world, especially the Friends of Ernestina/Morrissey, including many Cape Verdean-Americans, supporters from Cape Ann and members of the Bartlett Exploration Association. Because of her Essex/Gloucester origins the ship was entrusted to Massachusetts.

This is a very significant part of the amazing history of this Official Vessel of the Commonwealth of Massachusetts.

Laura Pires-Hester, Chair of the Schooner Ernestina Commission and Julius Britto, President of SEMA were pivotal in the efforts to repatriate the ship and are still working for the very best future for this wonderful gift.

This entry was posted in Commission, Historical Resources, News. Bookmark the permalink.

← Park Serve Day Postponed   |   What’s Been Happening Under That Cover? →