An Anniversary of a Record Run!

Ernestina-Morrissey, as Effie M Morrissey and as Ernestina, has had many close calls since 1894. In 1912 under Captain Harry Ross she left Portland Maine 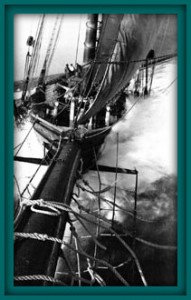 for her fishing grounds, Lurcher Shoal, near Yarmouth, Nova Scotia in December.

“From the dock in Portland to anchor in Yarmouth, she had made the 200 mile passage in 20 hours – an average of 10 miles per hour. The mainsail and jib were on her for four hours of that period; for eight-and-a-half hours she carried foresail and jumbo only, and the last seven-and-a-half hours of the passage was made under foresail alone.”

Onboard was Frederick William Wallace who often sailed with Ross taking photographs and writing of life on the Banks.

Wallace tells the tale of the 20 hour voyage in this excerpt of his autobiography.

He wrote a ballad inspired by his experience:

lyrics here: The Log of a Record Run  “The Mary L. McKay”