Commemorating the Gift of Ernestina to Massachusetts 8/29/1982

On August 29, 1982 Ernestina was officially transferred to the Commonwealth of Massachusetts as a Gift from the Republic of Cape Verde.

This pen, made of African hardwood, part of Ernestina's framing for 40 years, commemorates that gift.

To recognize this important anniversary an anonymous donor will match 3 donations of $250 AND the donors will receive one of the last 3 pens commemorating this wonderful Gift. Ernestina Sailing Forward is very close to the goal of raising $50,000 for the new mainsail.  Help meet the target and get a pen with your $250 donation.  More information HERE

Read more about the day of the transfer of the Gift of Ernestina HERE Jose Luis Fernandes Lopes, the Cape Verdean Republic’s ambassador to the United States remarked “ The ship is “an unmistakable catalyst in fostering a very special bond of friendship and human assistance from one country to another.” 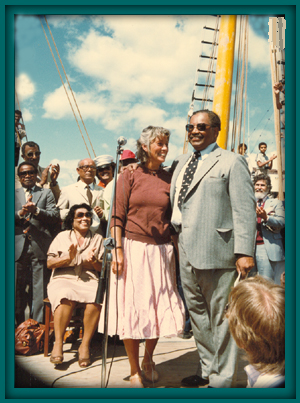 At 3pm, crew member Peggy Lyons hoisted the Stars and Stripes. The Ernestina had become American again. [She is shown in image to the right standing with Joli Gonsalves, Ernestina Commission chair