The Water Project is a great success!  We have nearly 50 samples of water representing Ernestina-Morrissey‘s AMAZING history! HERE’S A LIST of the great group of folks who helped with the project and where they collected the water they sent. You can see more about each one in the posts below.  Soon Ernestina-Morrissey will slip into Boothbay Harbor and then, after the final preparations, will make her way to those waters again, carrying her history with her!

Samples have come in from across Ernestina-Morrissey‘s history! From Essex, MA to Digby, NS, from Newfoundland to British Columbia and Greenland, from Mindelo, Cape Verde and of course from #HomeportNewBedford and her other berth at Massachusetts Maritime Academy! The most recent are posted at the top as you scroll down. ~~~  This list was started on June 8. The original listing which started with water collected January 18 was just too long!  You can visit that list HERE. There are 46 samples described below, THANK YOU to everyone who helped with this project! 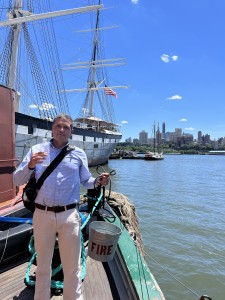 Effie M. Morrissey landed a catch of herring at least once at the Fulton Street Markets during the the later part of her fishing life.  Most of her time in New York was during the Bartlett’s Arctic voyages when she would spend winters in New York, her homeport at that time.  During the efforts to return Ernestina to the U.S. from Cape Verde South Street Seaport  was considered as a destination.  Peter and Norma Stanford who founded SSSM and were instrumental in establishing the National Maritime Historical Society were early and strong supporters of the repatriation and preservation of Ernestina. They recognized her important history. During the Education Years Ernestina traveled to New York Harbor for various educational voyages and OpSail events. Visit South Street Seaport Museum and the Fleet next time you are in New York City. 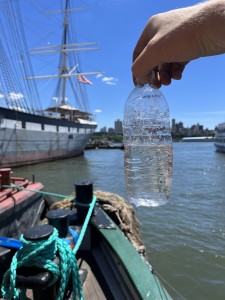 Water from the East River, looks like the Decker has the same dock lines as Ernestina-Morrissey! 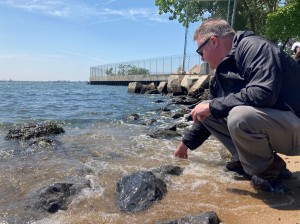 Seth Goodwin sailed by this shore several times when he was an Ernestina crew member. He sailed as mate in 2000 during the millennial Tall Ships events from Delaware to Halifax, NS

Ernestina participated in Tall Ship events in New York Harbor. Especially significant was the 1986 Statue of Liberty Centennial and the 2000 Millennial celebrations. Effie M. Morrissey‘s homeport was New York during Captain Bartlett’s time, between dockages at Staten Island and City Island and Rye, NY the vessel must have passed Red Hook many times! 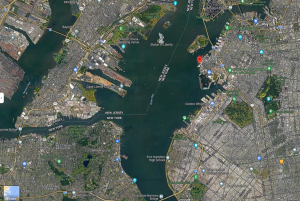 The Morrissey reported to the Army Terminal here to begin service in World War II. 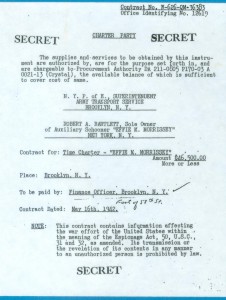 Now it is a mixed use area and NYC ferry stop for several lines. 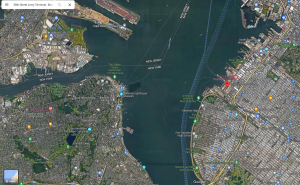 The red pin is the location.

The water was collected by Rick and Alessandro Lopes. Rick has been documenting Ernestina-Morrissey‘s history interviewing people from all parts of her story for more than 30 years. Rick has partnered with the National Maritime Historical Society to produce the documentary series “Sails Over Ice and Seas: The Life and Times of the Schooner Ernestina-Morrissey”. DETAILS AND VIDEO LINKS

In 1987 Captain Moreland took Ernestina to the Great Lakes. DETAILS HERE. “The Ernestina traveled roughly 3,000 miles on the year by the time she reached Milwaukee, Wisconsin to be the featured attraction in the Milwaukee Maritime Days. She had been a crowd pleaser during her five-day stay in Milwaukee, welcoming on her decks up to 5,000 people per day and profiled in the media frequently.” 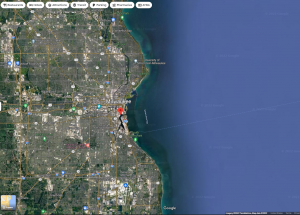 Thank you, Captain Krihwan for bringing water from Milwaukee, your previous homeport. And welcome to #HomeportNB 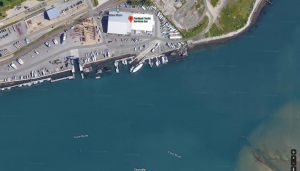 Portland has Effie M. Morrissey and Ernestina tales to tell.  One well documented trip by the Morrissey then captained by Harry Ross was the 1912  “Record Run” from Portland, ME to Yarmouth, NS, well documented in print and photos by Frederick William Wallace. 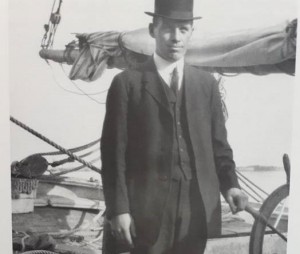 Captain Harry Ross of Digby at the helm of EFFIE M. MORRISSEY. From CAMERA ON THE BANKS by F.William Wallace

In 2003 now known as Ernestina, during one her many educational trips to Maine waters,  welcomed back one very special guest to her decks: Bartlett Boy, Austen Colgate, who sailed under Bob Bartlett in 1940 for a great sail around Portland Harbor. DETAILS HERE 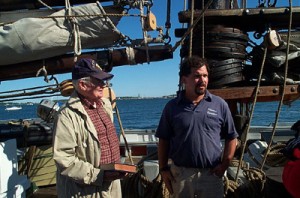 Location of Ernestina‘s first landfall in the U.S. at the end of her voyage of repatriation, August 24, 1982. 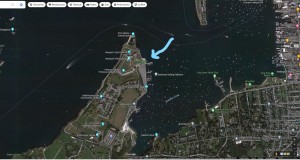 The crew and trainees aboard the SSV Oliver Hazard Perry collected water at their berth at Fort Adams. The same berth Ernestina took when she arrived in Newport in 1982 . OHP’s Captain Jonathan Kabak was mate on Ernestina in 2000. 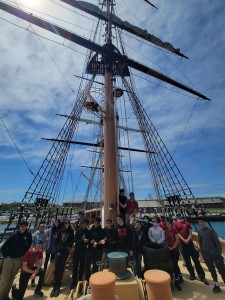 The crew and trainees aboard the SSV Oliver Hazard Perry with their water sample.

On August 24, 1982 at 8:30 pm, Ernestina entered Newport Harbor to clear Customs before the trip to New Bedford. 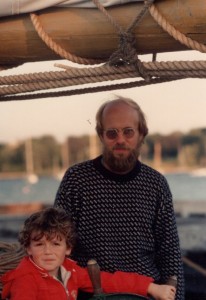 Stephan Platzer, who was radio operator and a crew member for the repatriation trip, returned to Ernestina after a night with his family. taken 8/25/1982 at Fort Adams.

Fred Littleton and Julius Britto met while working on the repatriation of Ernestina in the late 1970′s and after 1982 with the Massachusetts Schooner Ernestina Commission.  It was wonderful to receive these two samples from these Massachusetts waters.  Julius collected from the beach at Onset Pier to recognize the hard work of the Wareham chapter of the Friends of Ernestina . 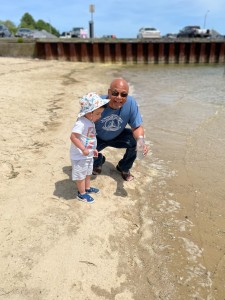 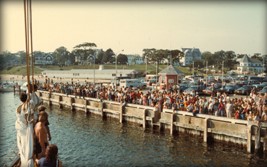 1982-The crowd waits for Ernestina to come alongside at Onset Town Pier enroute to Gloucester to be laid up for the winter and await work. 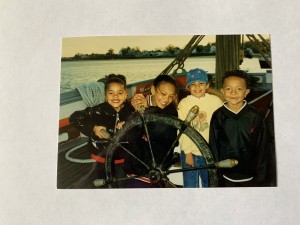 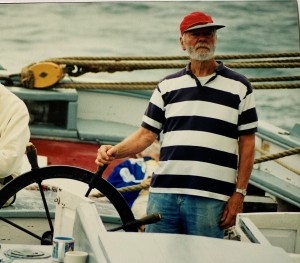 Fred Littleton at the helm, Bartlett Boys Reunion sail, Fred also served on EMHA and the Commission and volunteered for educational programming. 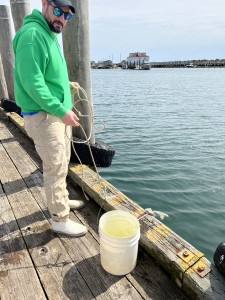 Annie McDowell, longtime Ernestina office manager and accountant, sent water she collected on June 1 from two locations frequently visited by Ernestina during the Education Years.  She wrote “Great location, a spot in Boston to have fundraising events, listen to music and even watch a movie projected on the sails of Ernestina at the dock. Many members, students & other groups joined the ship at the Fan Pier or Rowes Wharf locations to continue on to other ports or just have a sail in Boston Harbor.” 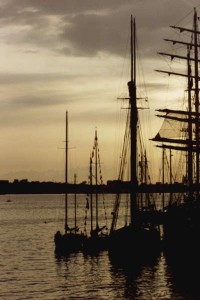 She also wrote that “This location is where Bob Hildreth boarded the ship for an education sail and was hooked ever since!” 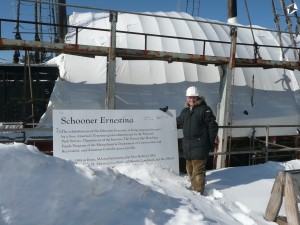 Bob Hildreth in 2009 at the Boothbay Harbor Shipyard, Maine during the bow work done then. He has been a tremendous advocate for and supporter of the Ernestina-Morrissey since he first sailed on her from Fan Pier.

Rowes Wharf is just across the beginning of Fort Point Channel from Fan Pier on Boston. Harbor. There was a reception there in 2009 when Ernestina returned from Maine. 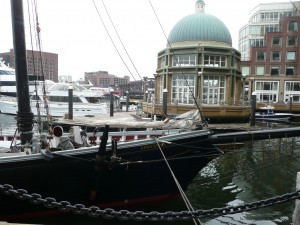 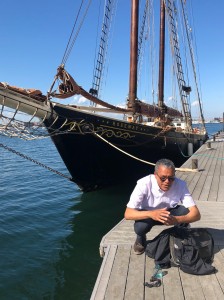 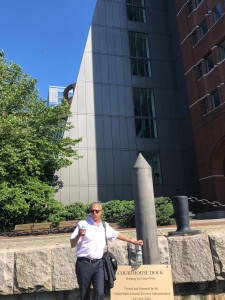 This was the location where, in 2003 a young Tom Brady and Teddy Brewski helped Dunkin’ Donuts launch their new espresso product line with Ernestina as a backdrop with a great new fisherman sail!

Along with Captain Krihwan there is now a crew of 5 working on Ernestina-Morrissey at the shipyard and they collected water for us.  Ernestina spent time on this railway in 2008-09 having work done on her bow and forward deck beams. 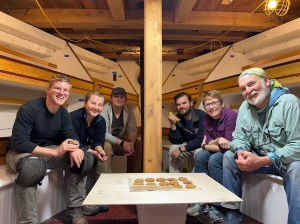 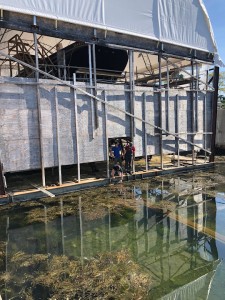 Collecting from the platform of the railway. You can see the rails that Ernestina-Morrissey will soon be rolling down as she is launched with all the waters we are collecting! 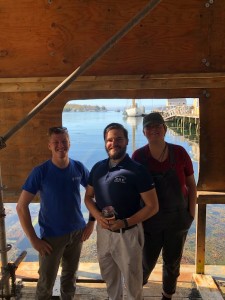 Another sample from Annie McDowell with help from her grandson Anderson DeBrito. “Great spot for a last-night anchorage when Ernestina was sailing with a group that had to disembark early the next morning in New Bedford. We have enjoyed seeing Ernestina anchored off the beach and hope to continue to see her sailing in Buzzards Bay with the  next generation of sailors.” 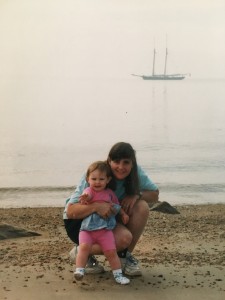 Annie with her daughter Anna, with Ernestina at anchor in the fog. 1998 Ricketson’s Point South Dartmouth, MA 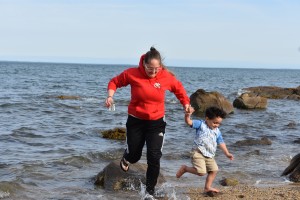 2022 Anna and Anderson after successful collection. 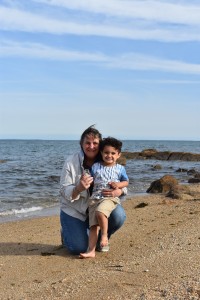